As a name is given to the beast which haunts the shadows, Agreus makes a deal with Imogen and Vignette is put in a life or death situation.

A Life For A Life: Mima Sawsaan, Haruspex, Philo

Picking back up on the case from episode 2, Philo speaks with Mima Sawsaan, a holy woman, about what might have attacked Aisling? For he runs into the being and can’t identify it. Thus leading to the term “Darkasher” being revealed and Philo being directed to the same Haruspex that Piety uses. Leading him to learn about what is essentially like Frankenstein’s monster. A golem which is a combination of two and usually required a sacrifice to make.

But, to prove its existence, Philo has one made for himself and, so it seems, he is raped to make the golem and later it is revealed how the golems work. First, they can only die when their master does, and the extent of their connection isn’t limited to life force. The master can also connect with their golem in terms of sight and motor skills. Leading to the question of who is using a golem to kill people and why?

Piety pushes Absalom closer and closer to the edge, to the point he snaps. On the parliament floor, with little evidence, he throws around the accusation that his opposition leader, Ritter Longerbane, kidnapped his son and is holding him. Which, at first, is just treated as a lapse in judgment. However, as Ritter learns his progressive daughter, Sophie, wishes to go to college, travel more, go against the grain, he is arrested. Later, Piety even poisons him and then reveals where Jonah is being held. Showing that she is a far greater danger than perhaps any other character met. Though, of course, not all political matters are about murder and accusations. There also are social politics. Such is the case for Agreus who, purely out of curiosity, accepts Imogen’s invite for tea. Mostly since he wants to see if she is playing a game or not. However, upon hearing the financial status of Ezra and Agreus from a friend, so do the wheels turn of how he can make an arrangement which benefits him and Imogen’s family.

For The Love Of You: Ms. Fyfe, Philo, Vignette, Tourmaline, Dahlia, Hamlyn

Ms. Fyfe, for quite some time, has wanted to take her and Philo’s relationship beyond him renting a room from her and them occasionally having sex. The problem is, he was always distant. Presenting this sort of, it’s not you, it’s me, and trying to be one hand up her skirt and another out the door. But then that changes, for some reason. Maybe it is because he forgives himself when it comes to Vignette? Be it because he paid off her indentured servitude, having this belief they could never be, then or now, or saving her life and returning a memento to her. One of these, among many unnamed reasons, pushes Philo to try his hand at love again.

Leaving Vignette in a bit of a pickle. Her life keeps ending up in Philo’s orbit, and as he tries to absolve himself of guilt, it leads to Dahlia worrying she is a turncoat and being that Dahlia handles issues with urgency, Vignette is in trouble. Especially since Philo’s timing coincides with there being an issue with a supply run. Making it seem Vignette is the cause.

However, Tourmaline, despite her not being fond of Philo, gets him involved and he helps set up Hamlyn to go down. But, with Dahlia, things aren’t simply pointing a finger and that being it. Dahlia wants to be sure, so she asks of Vignette to kill Hamlyn. A task which, initially, was difficult since Vignette has never killed one of her own. Yet, what truly makes the task difficult is Vignette doesn’t take him out when she gets the chance, so they end up fighting in the air, and when they hit ground, he nearly kills her. At least until Philo, as mentioned above, saves her life with a well-placed bullet.

Agreus and Imogen Coming To An Understanding

The underestimated and disenfranchised are often unnamed on Carnival Row, except for Agreus and Imogen. So while it is begrudgingly on her part, at the same time I can’t wait to see what comes of them working together. Particularly the awkwardness this might produce because Agreus doesn’t appear to have much in the way of social etiquette skills.

Not in the form of him making loud slurping noises, but more so he seems not to take slights well and has quite the temper. So I’m looking forward to seeing how high society handles a well-spoken faun who has an anger issue. Much less, what their reaction will be since let’s not pretend police brutality isn’t an issue on this show.

Increasingly it is clear this show isn’t going to make Philo and Vignette getting back together a quick and easy journey. For one, both have feelings they are struggling to navigate when it comes to how things ended. For Philo, it is lying and saying he died, dealing with his position in society, and what sacrifices he’ll have to make in order to be with Vignette. Hence Ms. Fyfe being chosen for she is the safe choice. Being with her means digging his heels into this ruse he built and reinforcing it.

Then with Vignette, she is living in a place where she is an other. A place in which her using her wings could get her arrested, maybe her wings sheared off. Heck, all things considered, where outside the brothel have we even seen pixies? Dahlia mentions she was a lady’s maid at one time, but I have yet to see one.

So, taking note of how terrible her world is, can she ask of Philo to sacrifice his privilege? Much less, he lied to her and abandoned her. Made her feel like a widow. How can you reconcile him being alive with the grand betrayal of him not even respecting you enough to say goodbye or break up with you properly? For, in a way, that is what he did. He faked his death to escape her. Mind you, so she wouldn’t do anything foolish, but still. 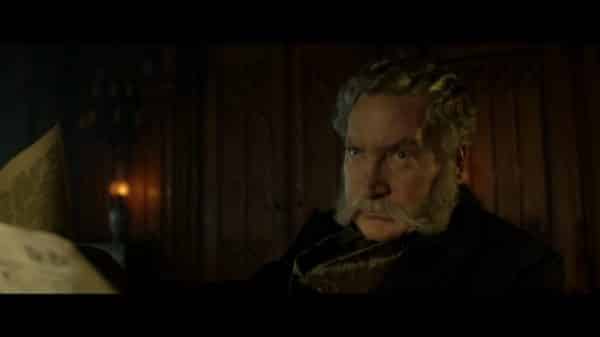 One of the major issues with the political drama of this show is that no one seems all that powerful on this show. They have a family name which holds clout, but that’s it. Otherwise, how in the world would Longerbane end up in a dank prison? Never mind be accused, or poisoned, without an uproar? None of these people seem to truly matter and their political parties? Who are those people? What are their names, positions, and ambitions? Are you telling me none of them have their own plans to be chancellor or the opposition leader? Are they just hype men in the back?

I think I may have hoped for too much. In my mind, Dahlia was going to take Vignette under her wings, mold her in her image, and we’d see Vignette and Philo firmly be on opposing sides of the law. However, considering how Dahlia nearly killed Vignette, and Vignette seeming like more of a lover than a fighter, can you imagine her sticking around? Her fighting for someone who, on a whim, maybe because she is feeling paranoid, would kill a subordinate? I can’t.

Agreus and Imogen Coming To An Understanding - 85%