We come to learn how Vignette and Philo met, a grave secret he and Darius hold, and see the final days of the war.

The Young Woman Who Watches Over The Books: Mima Roosan, Vignette, Philo

Back during the war, Philo finds himself in the highlands at the mercy of an isolated village and its religious leader Mima Roosan. Someone who clearly doesn’t like the idea of a bunch of soldiers taking things over, noting a treaty to a war that devasted her people, and it nearly seeming she should be so grateful for their presence. Hence why, as Philo gets nosy, decides to explore, and encounters a sacred library, Vignette is asked to keep an eye on him. Mainly to make sure the treasures of pixies don’t end up at auction or stolen and held captive in some museum.

What’s a show, with a hint of romance, if the male lead isn’t broody, mysterious, and has a dark past? Such is the case of Philo. He’s quiet, a bit of an outsider, and seems to spend more time reading a book, “The Kingdom of the Moon” about a half-fae child seeking their parents, than interacting with his peers. Well, at least outside of work-related things.

This perhaps is part of his appeal though. Philo is different from the other humans and after growing close, so close they have sex, Vignette learns Philo is half-fae and the reason he loves that one book so much is that the story reflects his. He doesn’t know his parents, he is half-fae, and while he is passing, it puts him in this odd place of not knowing where he belongs and fearing getting too close to anyone. 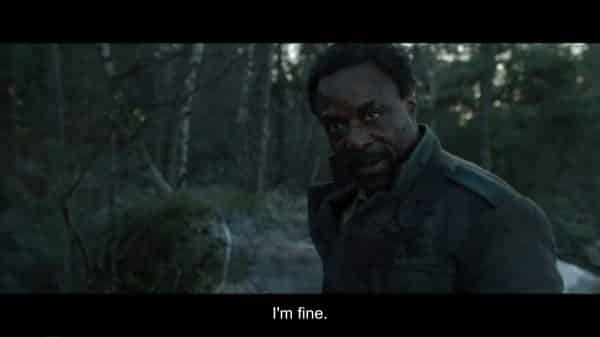 Which becomes a problem one of his peers named Darius may end up sharing. You see, this group known as “The Pact,” who are the reason Philo’s troop is in the highlands, are cutting down communication lines. So, naturally, Philo, Darius, Vignette, and a few others, reinstall the lines so telegrams can go out. However, during this, they are attacked, and Darius acquires the Wolf’s Curse. Making it so now, he is a werewolf.

But, rather than have a woe is me attitude, he actually embraces it. In a way, it even pushes him, and the viewer, to understand why the fae live as they do. For they seem to have a certain freedom in being themselves, and enjoyment of their culture, that rushing towards technological or weaponry advancements isn’t a huge goal. Even if before the humans came, there was war.

Was It The End Or A Long Pause?: Vignette, Philo, Tourmaline, Mima Roosan

Before the village was attacked, Tourmaline, an old friend, a possible lover, of Vignette shows up. Within no time, she is poisoning Vignette and Philo’s new relationship and pushing the idea it could only end in tragedy. Be it because of the war or because they belong in different worlds. This negatively effects the relationship and leads Vignette to wonder what can they be long term and Philo, well it pushes him to wonder if his line of work, and his secret, could get Vignette killed.

So, when airships of the pact attack the village, he asks of Mima Roosan to say he died. Hence why, 7 years later, Vignette is pissed at him yet also, in a way, glad he is alive. Since, outside of Tourmaline, he is the only thing which reminds her of home. But, like her own personal past, outside of Philo, home is complicated, filled with painful memories, and it is hard to say whether she wants to lay that baggage down and abandon it, or shift through for happy memories. Their relationship, as of now, is the driving force here. Is it the best relationship I’ve ever seen? Absolutely not. Yet, there is something about Vignette which makes it so you can see this fear but yearning for love. Making it where you have your fingers crossed that Philo will get his stuff together. Since he clearly has shut down in so many ways and has a fear of intimacy.

While The Pact is established, I feel like we don’t really know them that much. All we know is they are the enemy but it isn’t clear why or what caused the rift? Who threw the first stone and is peace possible or they want a genocide? Also, considering the technology they have, did they work with humans to gain that or they came up with that all on their own? What I’m asking is: What’s their story?

The Parallels To Reality In Terms Of Colonialism And Being Mixed

When it comes to fantasy and sci-fi, strangely, the ails and issues of indigenous and non-white people are usually made into stories for white folk. This show is no different, and while I appreciate it, at the same time it bugs me in a way. For outside of Agreus, and now Darius, we don’t see a whole lot of people of color with speaking roles. There is also Tourmaline too but who is she but a possible jilted ex jealous the woman she loves is stuck on some man she thinks is human? Also, mind you, Philo is getting to portray being mixed, but the show doesn’t bring up the idea of passing much and other issues with being a minority. So it is like it is dipping its toe in these issues, using them since they are familiar, but watering them down, showing the sensational bits, and avoiding getting into the complexity. For then they’d have to acknowledge the source material, be it the various civil rights movements, or colonialism, in full and not just use bits and pieces to create some form of drama.