Beyond: Season 1/ Episode 10 "Into the Light" [Season Finale] – Overview/ Review (with Spoilers) 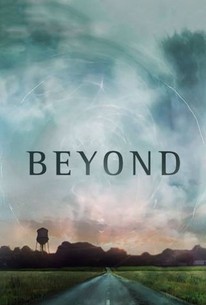 Like most season finales, outside of maybe Game of Thrones, we don’t end things on a high but a fizzle. For while we finally get to know what those weird faceless things are, many of the other things revealed below are either frustrating or just too convenient.

Topic 1: What Lies Beyond The Bridge (Willa, Holden, and Dr. Frost)

Holden creates the bridge Dr. Frost so badly wanted and he does see Celeste. However, it is soon revealed, thereafter, that those beings which can shapeshift are just playing on Frost’s desires. In fact, sort of like dementors, they feed off joy and happiness and seemingly suck the life out of their victims. Which, once discovered, leads to Holden destroying the bridge that maintains the connection between the two worlds. Something he’ll later learn to regret.

To me, this was all very anti-climatic. Though, as stated many times, the realm was never built up properly. The focus was more on Holden’s relationships, Jeff’s investigation into Hollow Sky and trying to figure out who between Arthur and Dr. Frost was the evil one. Making it where the realm was just a place with wolves, birds, and these odd faceless things. Monsters which look so familiar but I can’t think of the exact production I’m thinking the designs were inspired from. Either way, expect to see more of these things in the future. Yay (sarcasm).

Topic 2: Back Together Again (Charlie, Holden, Luke, and Jeff)

Not too long after Willa and Holden wake up, everyone regroups, including Jeff and Luke, and they are in an SUV hightailing it out of there. Surprisingly, only two guards and one vehicle stand in their way during the whole escape. Leaving good times for all as Willa gets a goodbye kiss and Luke preps Holden to expect questions and lie to their parents.

Though the more interesting tale is it being revealed Mustard Jacket is likely the aforementioned stepfather. That and he seemingly wants to help Charlie get back at Arthur but what is he trading for that? Such isn’t revealed.

So you’re telling me, that whole compound which seemingly had guards up the wazoo had one truck come after Holden? You’re telling me that one man with a gun was able to make two guards give up and get locked up? You’re telling me, after they announce on the radio that Holden and his friends were escaping, no one followed them to Holden’s house? You got to be F’ing kidding me!

Though that isn’t the only BS. Unless we are to see Holden as some kind of player, how is he going to go from falling in love, and having his first time, with Charlie, to now going back to having makeout sessions with Willa? Are we just going to rewrite history and forget the chemistry Charlie and Holden have? Are they trying to make Willa and Holden a thing when clearly it is the lesser match, by far, between the two? Nevermind Willa is the lesser character and her actress, which I have nothing against, is also not as good of a performer. She isn’t bad by any means, but she seems like the model turned actress type who is beautiful, can say a few lines and make faces, but she doesn’t have the ability to snag you. Unlike Charlie, and her actress, who was just so awesome. Though now she is paired with Mustard Jacket and likely going on an Arthur hunt. Though, who knows, this show started off with one love triangle after another, so maybe Charlie could send Willa to the realm and she can be Season 2’s Kevin.

That’s too much to hope for though, isn’t it?

Topic 3: There Are Consequences For Your Actions (Holden)

Things in the afterlife aren’t like our world. When a bridge is built, it has a purpose. When you are given a monstrous headache, it isn’t a challenge to see if you are worthy. No, it is a deterrent meant to send you back from which way you came. Yet, with Holden going onto that bridge, and destroying it, it seems what may have seemed like a connection between two worlds was actually some kind of barrier. One which, with Dr. Frost crossing, and Holden breaking, is no more. So now this faceless being, among who knows what else, have made the real look apocalyptic. Something the 13-year-old version of Holden says is only the beginning for they are coming for the real world next.

Season finales have to build up some anticipation and storylines for the next season and with Holden destroying the bridge, the faceless which have had limited movement in the realm isn’t the worse way to go. An otherworldly adversary surely will be better than Dr. Frost, and even Arthur to a point. Heck, it could make up for the lackluster world building of the realm since now it is a battleground to keep the faceless from crossing over. However, after a whole season, binge watched, I don’t have faith in this series. Its lead is as boring as a cornstalk and highly reliant on the other characters in the scene building him up. Of which, outside of Charlie, Luke, and Jeff to a point, no one does that well. I mean, there is a serious lack of onscreen chemistry, romantic or platonic, between a lot of these actors. And while they go through the motions, as we often saw with Willa, the disconnect between the two always leaves you questioning if it is the writing, the actors, or maybe just lack of development which is the problem.

So, with that said, I’m definitely not watching and reviewing the next season. I will probably watch it but, like Stitchers, I’ll wait until the season is over. For while this isn’t setup as a binge watch type of show, that high from Charlie’s episodes, and the Lydia one, is what got me excited enough to finish this. If I had 6 days to lose that high in between each episode, I wouldn’t have probably finished this. I would have stopped around episode 3 or 4. Making this a true “Mixed (Stick Around)” type of show.

Although Willa is not a terrible character, I just wished that they didn’t make Willa and Hayden have a romantic past. I wish their relationship was just platonic because just once I want the main character to choose the girl who is socially deemed “less pretty”. For crying out loud he had his first time with her which was full of relateable awkwardness, laughter, and all around happiness. Charlie has been through soo much and for her to have her heart broken…i cant take it. He had barely any contact with Willa and whenever they did, she got annoyed with him, said “I believe in you and take my compass” and then kissed him…this bothers me, but being the stubborn person I am I will probably stick around…It might be good (not as good as stichers tho)

And that bothered the hell out of me too. How are you going to have such an authentic romance, one that doesn’t feel pushed onto the viewer, and then after playing like you’re married, her getting his virginity, and she opening up to him like that, she gets forgotten so quickly? Much less he goes back to Willa like Charlie didn’t give him the first full-fledged girlfriend experience he can actually remember and wasn’t planted in his head.

Another Stargate story….Crossing into another dimension, thru a CERN like Stargate portal where evil entities exist on the other side. Apparently they are looking for a way to enter into our world to destroy it.
Lots of movies and TV shows these days depicting the dark ones as in fallen angels trying to break thru dimensional barriers they have been contained in to protect the world from their evil. This is just as the bible and the book of Enoch tell us.
Is Holden the Christ like Savior of mankind? Guess we will have to watch season two to find out!

Honestly, I don’t know if I could really be down for a season 2. Outside of those few Charlie focused episodes, I was struggling to keep interested and manufacturing hope with his brother being into drugs and just being happy Erika Alexander is still a working actress.

I feel the same way..so many holes in this story, Willa is a bore.. and why couldn’t she just run off the bridge instead of maybe falling off? Definitely not worth the time..