To help you understand how hard Al’s decision was to let Earn go, we take it back to middle school where Al stuck up for Earn and it had deadly consequences.

Earn didn’t grow up rich. In fact, most of the kids would say he dressed like a bum. So when he saw a FUBU shirt at Marshalls, he had to get it. Problem is, he didn’t know it was fake and surely didn’t anticipate the other kids not just letting him shine but picking over whether or not the shirt was real.

Despite being in ROTC, Al was always a hustler and a bit of a thief. One of his main hustles was opening up lockers and selling people’s stuff. Sometimes back to them. But what he has to deal with in this episode is his cousin who is about to get seriously clowned. Which won’t just be bad on him but a bad look for the family. So, naturally, he doesn’t let things go down like that. 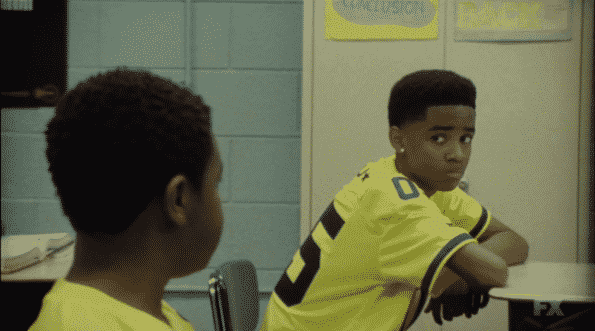 When it comes to bullying, especially to the point of suicide, while there was a story about a young black girl hanging herself, you don’t hear about it happening to Black kids that often. However, with Al sticking up for Earn, and saying this boy named Devin, also wearing a FUBU shirt was wearing a fake, he got bullied to the point of killing himself. For with his parents divorcing, and that being hard on him, being bullied, not just by his class, not just within his grade, but multiple grades, hell the whole school getting involved? It was too much so, in an undisclosed way, he took his life. There are two things to get out of this. Perhaps the one which deals the most with the show overall is how much Alfred had to stick up for Earn and did certain things solely because he was family. Hence why we shouldn’t perhaps take his decision to fire Earn as his manager too lightly. Yet, on the other hand, you also get to take note the weight of the situation. Earn got Alfred involved in a situation which directly led to someone killing themselves. Fast forward ten, maybe twenty years later, and Earn is still putting Al in messed up situations. Its an endless cycle with them and while it may not be on the level of Earn getting Al involved with someone committing suicide, think about ole girl from the last episode?

If Earn wasn’t there to catch Violet, Tracy would have probably killed her or at least ended up breaking her neck. All because Earn wanted to cut corners. Remember, “The Club?” Because Earn didn’t handle the deal right, Al owed the owner money. And I’m sure between Earn being his manager, to just being his cousin, Al has done a whole lot for Earn at his expense. So, we have reached a point where, while they are cool, there is a certain distance needed for Earn may have good intentions but that boy’s luck is absolutely terrible. Outside of Van. Oh, and one more thing, you have to also appreciate how much the episodes focused on the mental health of young Black kids. Not just in the case of Devin and what he was going through, but Denisha as well. It isn’t clear, what so ever, what made Denisha so mad when the teacher, woke her up from her nap, but something happened and next thing you know she is excited about class, wants to read and everything.

Perhaps pushing the point that Black kids need someone to pursue understanding them too. To have someone give excuses for them, talk to them, and not just write them off. For, what it seems, Mrs. Banks didn’t necessarily do that. Was she perhaps tired of Denisha’s attitude? Hell yeah! But she didn’t give up on her and maybe, just maybe, that is why, when Denisha’s head wasn’t hurting anymore, she wanted to reciprocate and be the kind of student Mrs. Banks knew she could be.

Thank you explaining that for me. I was getting annoyed as to why they were even doing this episode in the 1st place. Now, it make better sense to me. Great reveiw!!