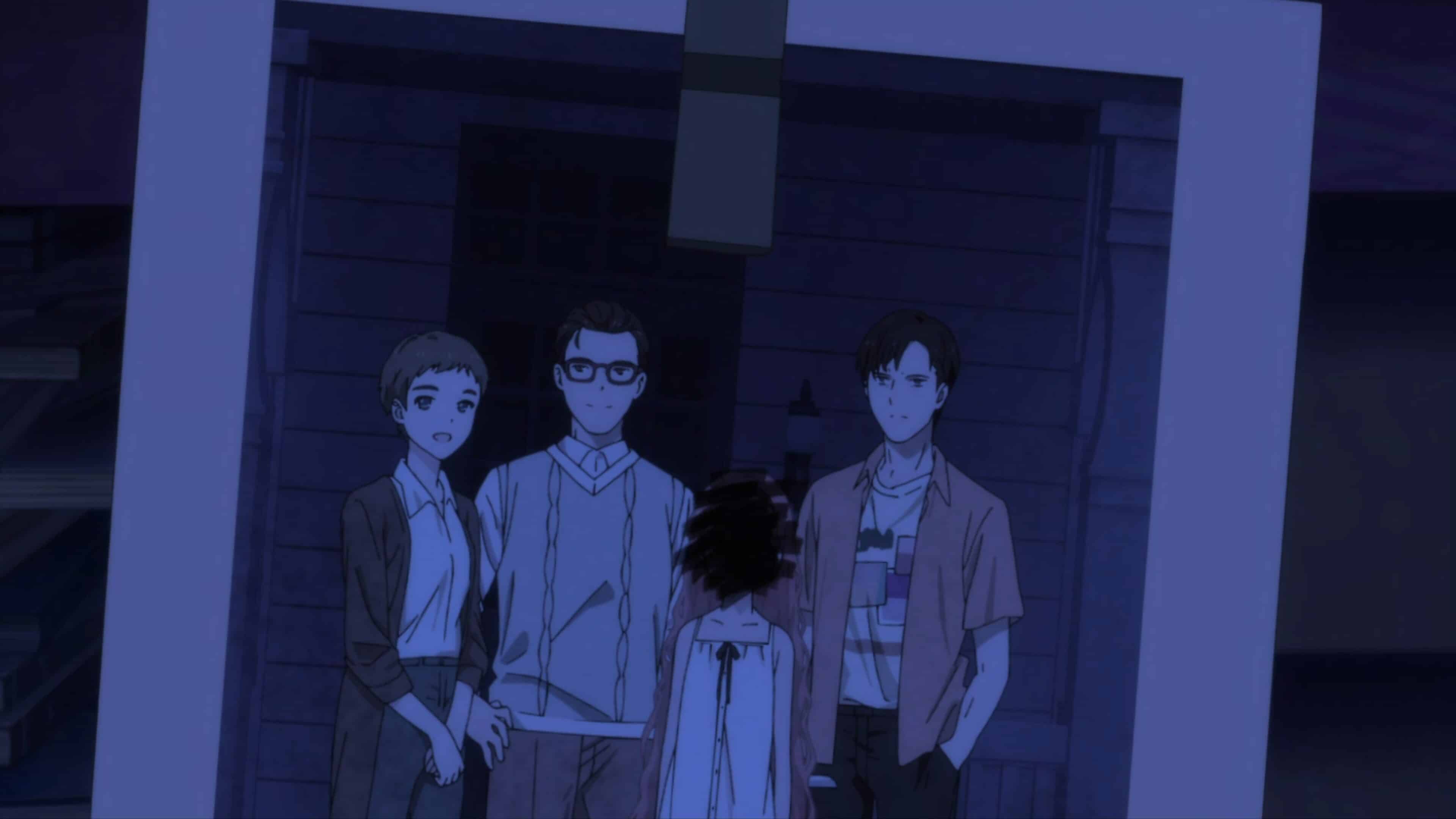 Azusa, Acca, Frill, and Ura-Acca in a family picture, with Frill's face blacked out

Why Ura-Acca and Acca started the Wonder Egg Project is revealed, and the story is quite heartbreaking.

Another One Bites The Dust – Rika, Dot

Like Momoe, Rika gets a chance to reunite with the person she might have played a role in causing the death of. But, while we once again have a moment that makes it seem Rika is released from the guilt and pain, then a weird insect, flower-looking thing, this one named Dot, appears and kills her pet. Which causes her to be a bit shell-shocked (no pun intended).

Despite us leaving Ai with her guidance counselor, thinking we’d get his take on why Koito died, instead, we find Ai at Ura-Acca and Acca’s house after dark. It isn’t clear if she was invited or just came about as we’ve seen her and others have done before. However, as she stumbles on Ura-Acca and Acca’s research, she finds herself being discovered by Ura-Acca, who is in the mood to reveal a bit of history about himself, Acca, and the two women in a picture Ai finds.

To begin, he builds up the story about Frill – who Dot and Hyphen both talked about. Her backstory is, when Ura-Acca and Acca were of flesh, they worked all day and night and under their employer’s surveillance. The reason? To keep the possibility of their research from ever being leaked or the two men from ever leaving the company.

Now, it isn’t said what company they worked for, but one could assume, be it BlueCorp or the Aonuma Group, Neiru’s company, it could be them. After all, it would explain how two men, who barely leave their home, and look quite strange, have contact with someone like Misaki, who exists in the outside world. But, that is a theory, not a fact.

What is a fact is that Frill was the product of a project that wasn’t work-related, which developed into an AI put into a 14-year-old artificial body. Now, why 14? Well, it wasn’t for anything nefarious, put it to you that way. In fact, if you didn’t know better, you’d think the reason Ura-Acca and Acca made a 14-year-old girl was because they were partners who wanted a child. One that shared their personality traits in a way that a biological child couldn’t, yet also had her own unique traits, including flaws, to make her seem human. So 14 would be the best age for her to show said traits and hold the independence they both value.

And for a long time, things were perfect. Frill was cheerful, funny, intelligent, curious, and a bit uncontrollable. Yet, her creation made Acca and Ura-Acca into a legitimate family.

But, that family began to unravel thanks to a combination of Frill’s jealousy and Acca falling for a woman named Azusa. Now, Azusa’s role in the breakdown comes from both Ura-Acca and Acca, allegedly, having a romantic interest in Azusa, but Acca winning her heart. With that, things began to splinter, for one of Frill’s flaws was jealousy. She didn’t like the idea of another woman in the home, especially one that took away attention from her. Add in she wanted to be the prettiest woman in the house, and this caused problems.

However, the final straw was Azusa becoming pregnant with a girl. This led to Frill murdering her but the child, Himari, surviving. And to make sure she didn’t just survive, but lived a long life, Acca, in a fit of rage, trapped Frill into a storage area within a shed – seemingly cut her off from the world.

Well, at least he thought she was. For in the 14 years Himari was alive, things were perfect. She was like everything Acca and Ura-Acca wanted when they created Frill, but Himari was human, with Azusa’s qualities mixed in. But then, when Himari was 14, she killed herself. Why? Well, that’s the question Ura-Acca and Acca have been racking their brains about. For outside of her strangely promising herself to the man who she was raised around like an uncle, Ura-Acca, there aren’t any real red flags presented.

So, Ura-Acca, and perhaps Acca as well, blamed Frill. Someone who doesn’t outright claim she is the reason Himari died but doesn’t deny it either. Leaving her seeming like one of the factors Himari killed herself, but it isn’t clear if she was the only one.

As for why Ura-Acca tells this story? Well, it just seemed that after Riko and Momoe’s reaction to Frill’s minions, perhaps this information would give Ai a better chance. Now, as for Neiru? Unfortunately, she doesn’t seem to be a factor taken into consideration.

On The Brink of Tears

While we long assumed the Accas were weird, misogynistic, and exploitive, their story adds layers to both characters. Granted, there is still a notable chunk of it missing, but what we got when it comes to Frill, Azusa and Himari, stirred up our emotions a bit. For in the case of Ura-Acca, whether or not he romantically loved Acca, with Azusa on the scene, he lost his best friend to someone he potentially liked – allegedly. But then, with Azusa’s murder, he lost the daughter he had grown to love for years and was his companion as Azusa and Acca grew close.

And while, yes, Acca didn’t blame Ura-Acca for Frill’s madness at all, though one could say she could have been feeding off his jealousy, Ura-Acca also found himself losing his second chance at fatherhood through Hirami killing herself. And being that Acca got the girl in this episode, and how Ura-Acca was a little saddened by how Riko and the others saw him in the previous episode, it pushes you to think about how lonely he might be.

For, think about it, he really could be a queer man, knowing he could never have Acca love him how he wants to, and with Frill, he got to live the dream until Azusa came along. Then, because of Frill’s jealousy, she got that back for him but at the cost of someone’s life. A human life at that! Yet, because of Azusa being murdered, Ura-Acca got to experience that dream again, until Frill allegedly planted the seed, which led to Hirami killing herself.

I don’t know about you, but I don’t think I could easily deal with potentially having my dream come true, and it get stolen from me by a stranger, and then by the person who made the dream come true once before. It would just be a lot to mentally and emotionally deal with.

Heck, even Frill’s story could drive you to tears when you take note of her fears of being replaceable.

Setting Up The Perfect Ending

With Ai potentially knowing the truth about Koito, paired with her being tasked to take on Frill and her minions, the last episode has the potential to not only have some of the best action scenes of the series but emotional scenes as well.

Setting Up The Perfect Ending - 85%

With the Accas presenting the reasoning behind creating the Wonder Egg Project, while many questions remain, it seems we'll not only get an answer as to what happened to Koito but an epic fight to end the season, or series.