With different priorities once more, can RGB get it together to prevent another death, or will someone die due to their lack of cohesiveness?

For more than 10 years, Kunai and Ran have been friends. In fact, back in 2010, they founded DoRed together, after being inspired by their graffiti artist-hero, 0th. But, even back then, there were some minor problems in the friendship. What specifically? Kunai’s insecurities. He saw Ran as the one with all the talent and questioned his worth. At least until Kunai got into hacking and found a way to contribute. But with Ran picking up quickly and eventually surpassing Kunai, he again found himself questioning his place in DoRed.

While Kunai may have felt like he couldn’t contribute much to DoRed, despite being co-founder, he continued to practice his coding skills, which led to Di-VA. The program, which is rather popular, is a music generator app that creates healing music for the user. Kunai’s goal was to help people like his grandmother, who has dementia and leg pains, feel better.

Unfortunately, while he was independent at first, he allowed his work to be bought by Tarki, the leader of the Yabusame gang, who used Di-VA to create Drug D. Now, it should be noted, part of the reason for buying Di-VA was for the purpose of the cPhones that Tarki’s shell company, the Kaburaya corporation, made. However, with the Yabusame gang in construction, and Mr. Howard wanting to do redevelopment in Shantytown, it was a match made in heaven for them and hell for Kunai. Especially as he began to see what Drug D was doing to his friends and neighbors.

There Is No Room For Ambiguity In Justice – Koki, Shuta, Kunai, Ran, Hana, Tarki, Howard

Getting back to the trolley dilemma, once again, RGB has a split focus. Shuta wants to find and dispose of, if not dismantle the bomb. Ran wants to talk Kunai out of exploding the bomb. Then Koki wants to take down a terrorist. Now, Shuta tries, repeatedly, to take the bomb that Kunai made into a hard drive out of Tarki’s hands, but with the amount of security on the WINNER, Mr. Howard Win’s casino boat, it just isn’t possible, so he fails.

As for Ran? He tracks down Kunai, and figures out all that happened, but he is too late. Kunai, high on Drug D, is ready to hit that button. However, thanks to Koki using his persuasion skills on Hana, since it didn’t work on the captains of WINNER, Koki ends up getting Kunai killed – thus ending the dilemma, and possibly his friendship with Ran.

Ran’s past, and even DoRed’s beginning, was a bit of a mystery. However, with Kunai’s introduction, we got some sort of clue where Red came from, and it establishes why he is torn. On top of that, it confirmed how much Ran is different. He and Kunai grew up in Shantytown, were friends before RGB was formed, and even formed DoRed together. Also, Ran’s hacking skills, which plays a role in RGB saving people, that came from Kunai. So a lot of makes Ran who he is came from this person Koki just had executed.

It brings an emotional layer beyond what Asumi usually brings and forces you to realize how much RGB is a circumstantial friendship. One that works, but the systematic differences between each member is far greater than we know. Heck, with Ran, it is probably the most distinct, for he doesn’t come from a two-parent household, was utterly poor, and left to his own devices for most of his life. So in that lack of structure and a normal home and family environment, it makes Kunai and the members of DoRed all the more important. Which will make whatever Koki has to do to atone astronomically.

RGB Still Not Being On The Same Page 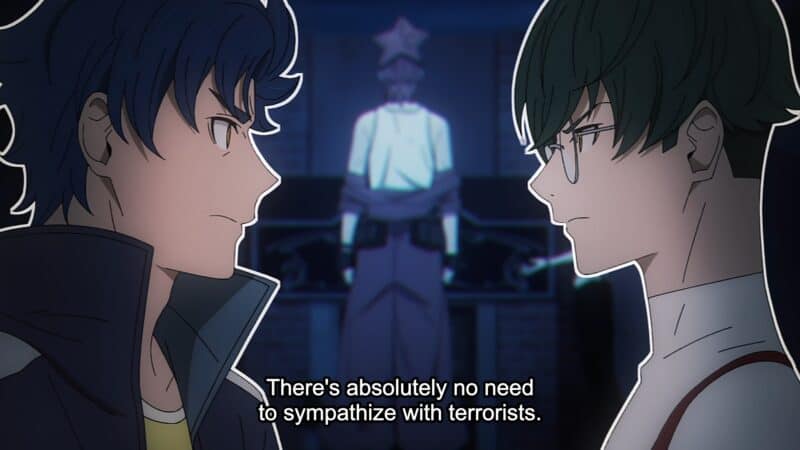 If RGB faltered once and found the perfect solution as they did the first time, this show would be boring. It would fit the same narrative of every other show in which no one got hurt, the heroes were perfect, and you’d badly wish for a flaw to create some need to worry. Well, with RGB being unable to reconcile their differences, that’s what we get here. We get them screwing up, people dying, and it seeming like that isn’t going to end anytime soon.

Because of that, we’re always kept on our feet, and I frankly appreciate it. For while Kunai was someone we barely knew before the last episode, the show establishes every death matters. In fact, considering someone close to Shuta nearly died, someone close to Ran did die, it does make you wonder if Koki is next?