The traitor revealed in the last episode explains their relationship with Isabella and complicates things for Norman.

Table of Contents show
1 Let’s Make A Deal: Ray, Norman
2 Secrets Between Friends: Ray, Norman, Emma
3 Will You Be A Liability Or An Asset?: Ray, Norman, Emma, Gilda, Don
4 Highlights
4.1 Norman’s Mental Gymnastics To Figure A Way To Make Both Ray and Emma Happy
5 Low Point
5.1 Don Is A Liability
6 On The Fence
6.1 Ray Being Revealed To Be The Traitor, But It Not Remaining A Secret From Emma
7 Follow Wherever I Look on Twitter, Like us on Facebook and Subscribe to the YouTube Channel.
7.1 Check Out Other TV Recaps

Norman reveals that he has considered Ray to be the traitor for quite some time but hoped, at the very least, he wasn’t his enemy. Hence him setting up a trap exclusively for him and Ray being forced to admit he fell for it. However, he cleans this up with noting that this grand plan, six years in the making, has been so that he, Ray, and Emma could escape.

But, now the problem is that Emma wants to rescue everyone and while Gilda and Don can be made into an exception, Ray doesn’t want the burden of all the little kids and babies. So, an agreement is made between Ray and Norman. Ray will pretend nothing has changed, release information he gathers, and still be on Norman and Emma’s side. In exchange, Norman has to give up saving everyone, or else Ray will blow up all of their plans. Norman agrees to this, with some mental gymnastics done afterwards.

Emma: You knew about everything for a long time, huh?

Rather than expect Norman, who has a crush on Emma, to hold the secret that Ray is the traitor, Ray just tells her outright. This blows the young girl’s mind, but she accepts it. She even feels bad for Ray since he likely held onto this secret a long time all alone. But, with that in mind, she tells him that while he might be forgiven for his past, like snitching on people and setting them up to be harvested, especially for their sakes, he won’t be forgiven again. Even if he did cover their tracks so they could get this far.

Will You Be A Liability Or An Asset?: Ray, Norman, Emma, Gilda, Don

Gilda and Don are kept in the know, but still very much feel like outsiders. Because of this, when Don’s concerns about Conny aren’t made a priority, especially after the discovery of a secret room Isabella has, he acts on his own. Well, Gilda comes with him, since the idea of a communications room must intrigue her as well, but this may come at the cost of them being found. But by who is the question the episode ends with. 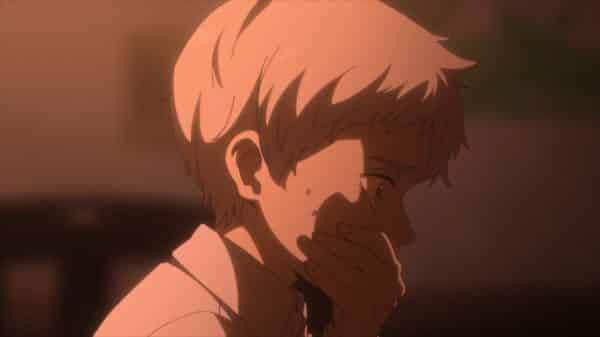 Norman is the in-between when it comes to Ray and Emma in a multitude of ways. Considering his empathy, his intelligence, as well as his physical abilities, he is a mixture of the two, but with increased intelligence. However, how to keep these two opposites happy might very well be impossible. For the core issue of sacrificing children is a no go for Emma yet Ray has revealed himself to be such an asset that even during the escape, losing him could be life or death. So between Norman’s crush and the one whose information will keep him alive, much less disable the tracker, he is between a rock and a hard place.

Don Is A Liability

While you have to appreciate Don being dumb enough to go into Isabella’s room to check into the communications room, at the same time you have to hate how reckless he is. Especially since you know he is operating on a lie and doesn’t really add much to the ultimate goal of escaping. He is just another person close to harvest age so including him almost seems like an act of pity.

Ray Being Revealed To Be The Traitor, But It Not Remaining A Secret From Emma

While I’m sure some figured out Ray was the traitor before the reveal, my issue is that he decided to open up to Emma about it. The reason that’s an issue for me is because it takes some of the pressure off Norman and his juggling act. But, what might be the good thing to come from this is now Emma is aware that Ray has the capability of keeping secrets from her, and possibly lie. So maybe, whenever we finally get to them running away, she might be accurately aware of him and what he may have planned. Never mind Norman’s part in said plan. That confused me as well, but it could be that he is academically smart but doesn’t have common sense. A special brand of brain which could still get Isabella the high profits she is known for.

Part of me is wondering why Don hasn’t already been harvested. He just doesn’t seem overly bright. And his impulsive actions are definitely going to put them in danger even if the current cliff-hanger turns out to be a false alarm.