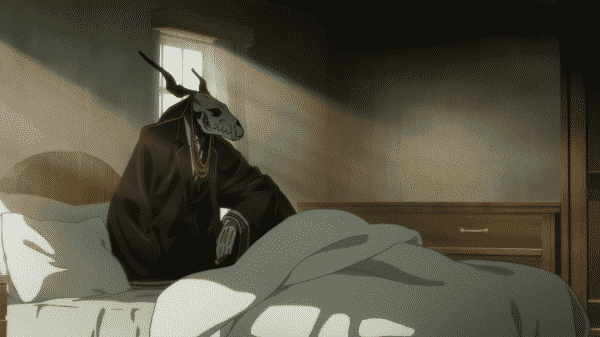 After showing a nearly obscene amount of forgiveness, Elias finally does something Chise can’t excuse and it pushes her to turn to an unexpected being.

With the coven being one of the few options that seem possible, since all their associates have no idea how to lift the dragon’s curse, Chise and Elias do Michelle’s spell to go to their gathering in the woods. Unfortunately, though, it seems they won’t be able to help. In fact, it seems Marielle knew they couldn’t but with the high priestess trapped in a tree, she was hoping maybe that she’d string them along so that at least her curse would be cured.

However, Phyllis is upfront with Chise and Elias, so after some social niceties, they leave. Just not before Marielle slips a spell to Elias.

You know, a part of me would love to know how Phyllis ended up in a tree and more about the coven, but at this point, with 3 episodes left, I’m just going to pretend we never met the coven. You and I both know that this is but to build up how difficult removing a dragon curse is, even from a likely eons old group. So, moving on…

I Did It My Way: Elias, Chise, Ruth, Stella 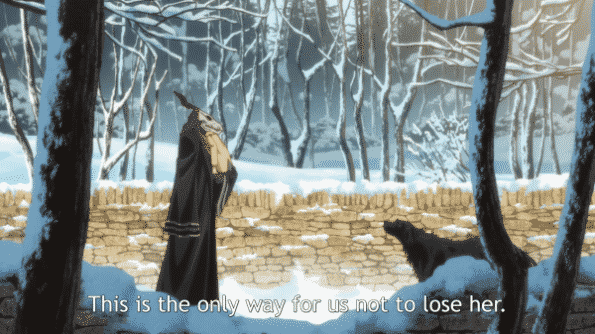 You know, Elias refuses to let Chise die. After all, she is the only one who makes him feel the way he does. Even Angelica, who Elias has known since she was a kid, doesn’t look at him or treat him the way Chise does. So, desperate times call for desperate measures, and with Ruth co-signing, that is all the validation Elias needs to take the spell Marielle gave and do something drastic.

Which is use Stella as a sacrifice to ensure Chise lives.

I question why Marielle gave this idea to Elias. Was it kind of a last-ditch effort to save Phyllis since, while Chise has this community around her, Stella would be an easy target so she could experiment and get what she wants? Or was it simply because she knew Joseph was possessing the girl and she wanted to force him out into the open? Maybe coerce him to possibly work for her since, while the being is crazy and high-key evil, he still knows things which have immense value.

But, following that, while I get why Elias had 0 issues with this plan, I’m a little surprised at Ruth. Granted, Chise dying means he dies too, which makes this more than saving his best friend but sacrificing someone’s sister, considering his origin story on the show, seemed a bit heartless. And it isn’t like Elias didn’t take the whole day in London to give Ruth the time to think it over. So, maybe Ruth isn’t the saint he appears to be. 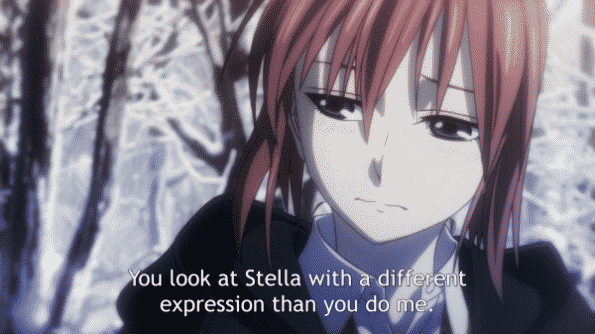 Jealousy is a horrible thing, and that is the source of why Elias chose Stella in particular vs. some random human he could find, or even to use one of the humans he probably knows talks crap about him. For, as of now, Stella is the only real threat. Alice and Chise have something, but she is damn near connected to Renfred like Chise is to Elias so, no worries there. Ruth basically is keeping her alive so, need him; Angelica barely visits, the faeries don’t come around as much, and so there is only Stella.

Which, when Chise catches onto this plan, it pisses her all the way off. And mind you, Elias just tried to kill her out of jealousy 2-3 episodes ago. So, it isn’t like Chise hasn’t given Elias a long rope to hang himself with. But, again, there comes the question of Ruth? Though, all of that will have to be handled at a later time since Stella is running scared.

Well, at least Stella’s body is. With touching Stella’s shoulder Chise gets a glimpse of Joseph and the gig is up. Leading to an offer: Joseph has a spell to ward off the curse and will give Stella back, if Chise agrees to come with him. Which, to spite Elias, and also because Joseph is threatening to kill Stella, she agrees to.

You have to love how villains are on this show. Whether you are talking about Elias, who everyone treats like a ticking time bomb or Joseph who seemingly is twisted mostly from immortality and whatever affliction he is dealing with. Despite clearly being evil beings, they are allowed some degree of humanity. Elias is this lonely to the point of destruction creature who, with this human girl looking and treating him as normal, as someone who could learn to be better, he holds onto that tightly.

Then with Joseph, while his origin is as mysterious as Elias, knowing he is immortal does make you feel bad for him in some way. Since it does seem like he wants to die but can’t so he explores ways that can become possible and during that he makes discoveries he pursues. Plus, there comes this idea that he wasn’t always this way. Maybe through being tortured or something, during the many generations he has lived, something broke in him.

Plus, think about it, once you get the ability to really defend yourself, and know you can’t die, and yet see people die around you repeatedly, and get maimed and blown to bits, only to eventually regenerate, you have to lose it at some point. While there is a certain coolness to immortality, if you are the only one you know like that, there is no way that it won’t eventually drive you to madness. To the point that you’d end up like Joseph. 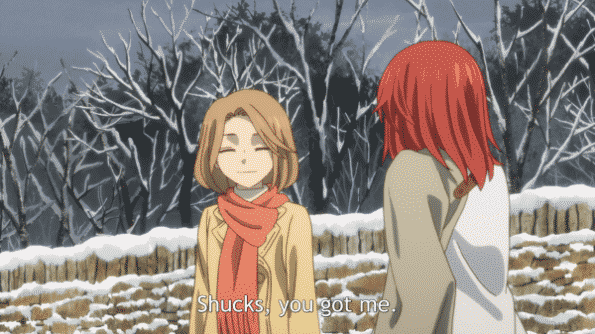