Wherever I Look
Recaps, Reviews, and So Much More
Home Anime The Ancient Magus’ Bride: Season 1/ Episode 16 “God’s Mill Grinds Slow But Sure” – Recap/ Review (with Spoilers)
Anime

It’s Christmas time and in the spirit of giving, Chise receives a certified friend and maybe a blast from her past.

Table of Contents show
1 Episode Focus: We’re In The Same Boat | Alice, Renfred, Chise, Elias, Ruth
1.1 Commentary
2 Subplot 1: You Got Me Feeling Emotions | Elias, Chise, Ruth
2.1 Commentary
3 Subplot 2: Brother, Is That You? | Chise
3.1 Commentary
3.2 Question(s) Left Unanswered
3.3 Follow Wherever I Look on Twitter or Like us on Facebook.
3.4 Previous Episode’s Recap

With preparations for Christmas in full gear, Chise gets a surprise letter from Alice asking for her company. This leads to, after Chise sneaks out, them both going Christmas shopping with one another. Which is a bit of a daunting task because the men in their life, well, who knows what to buy them?

Renfred, from what we see, is a man who has it all and Elias is just a plain enigma. Yet, while the shopping part is difficult, but accomplished, the true gift is that of friendship. Chise, who has lived a bit of a hard life, finds herself to be kindred spirits with Alice. Someone who used to be a drug addict, thanks to her parents, and even sold drugs until Renfred took her off the streets.

Now, as for why he did? Who knows. All that is clear is Alice will be eternally grateful and will have no idea how to ever pay him back. That and Chise may have become her best friend.

First Silky’s backstory and now Alice’s, it must be Christmas all over again. But with them handling her background, it does make me wonder if maybe Angelica is next? Maybe even Joseph, who is mysteriously still nowhere to be found. Heck, what is Renfred’s background? We know quite a bit about mages but sorcerers are an utter mystery. Plus, with him taking in some random kid, you have to wonder what kind of life he lived to inspire such a kid, and very dangerous, action.

Subplot 1: You Got Me Feeling Emotions | Elias, Chise, Ruth 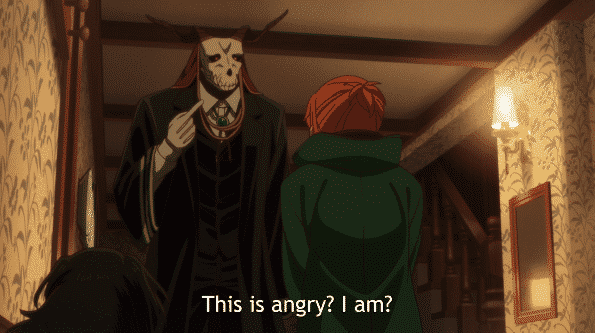 As has been made abundantly clear, despite Angelica, Lindel, and many others interacting with Elias over the years, there is still so much he doesn’t understand or know. Like, what it feels like to be kissed, what it means to see something beautiful and understand its impact, or even what it means to be mad. That is, mad but not ready to go on a murderous rampage. This is what Chise has introduced to him and which Ruth has committed to helping out more with.

After all, Chise, with her never wanting to be troublesome, keeps a lot of how she feels, mentally, emotionally, or physically, to herself. Causing her to suffer unnecessarily. Plus, like when Chise almost got drowned, arguably, if Ruth did more, she could have avoided another traumatic memory which acted as a wakeup call.

I’m glad they addressed Ruth’s absence in the last episode, and what was allowed to happen because of it. But, I gotta admit, I find the fact Elias is just now learning about so many things so weird. This is a being decades, if not hundreds, of years old, and you’re telling me all these people, who often talk behind his back, never introduced him to certain things and emotions? Lindel especially since he was tasked to adopt Elias?

Subplot 2: Brother, Is That You? | Chise Randomly, a child named Ethan bumps into Chise, and his sister Stella runs after him. Later on, the being which transformed Chise into a fox sees this child, and something sinister is implied.

One of the missing pieces of this show’s story is: Where is Chise’s father? All we know is that he left the mom, took their son, and from there everything went downhill. However, the why and whether he ever sought out Chise? That information is totally absent. So, fingers crossed, we might be getting some answers.

Chise’s back story does need some fleshing out. We’ve kind of been getting info in a trickle throughout the whole series but it really is time the show does something with that otherwise we’ll get to the end and still be no wiser about how she ended up where she has.

We have about, 8 or so episodes, so here is hoping. With quick back to back backstories, they are trying to properly wrap things up. I’d hate a GATE like ending…