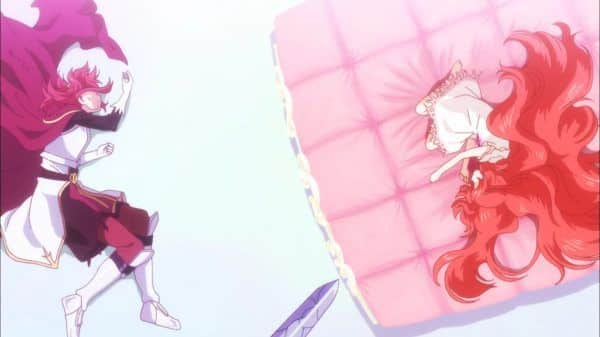 Lillia and Elq after Lillia stabs Elq in the stomach.

In Gomag City, where most of the lives Willem knew ended, Chtholly is triggered. Thus sending us into some flashbacks which answer, or clarify, a handful of things. Mostly in association with Willem.

About That Marriage Proposal: Chtholly, Willem

Chtholly has gotten what she wanted. After so much flirting she got proposed to. But was that just a heat of the moment kind of thing or real? Can they hold hands now? If she asked him to kiss her would there be no arguments? It’s hard to tell. Though what is clear is that Willem is realizing the weight of what he said. So while he will still be by Chtholly’s side, it isn’t clear if that proposal may or may not get rescinded. If I was the kind to make lists, they would be in the top 10 most annoying anime couples.

There is a question of whether Willem loves Chtholly in a romantic way or not. Granted, he proposed, kisses her in this episode, and what not, but I’m still unsure. If only because it seems like he is going through the motions. Like he is doing what she likes to make her happy as some sort of atonement.

Of which he is trying to atone for not saving and making his daughter Almaria happy. Not being able to prevent the death of his wife, girlfriend, or what have you, Lillia from dying. So with Chtholly, he is given another chance. One which he maybe realizing he is going about all wrong. For maybe, just maybe, he is realizing he is putting too much of his own happiness and comfort aside for this girl.

The Fall of the Gods & End of Chtholly: Willem, Chtholly 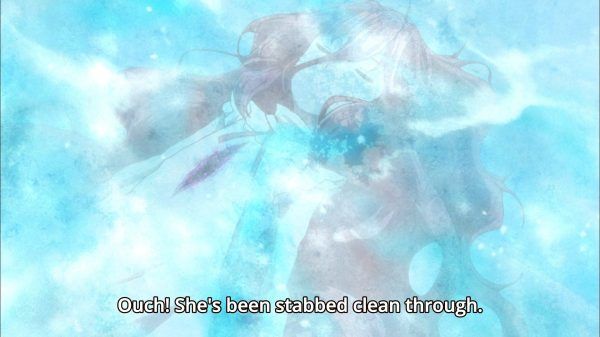 A bit of background: Before the beasts were born, mankind went to war with the gods. According to Elq, they were called the Poteaus and consisted of Carminelake, Jadenail, and Eboncandle. Elq too was a god, but seemingly at a toddler stage. But, it seems her death is what gave way to the defeat of the gods for she was their master.

Now, to make things even more complicated, despite her death, like Eboncandle, we see her. Granted, encased in some Sailor Moon type of ice crystal, but we see her. Though with the gorge still there from Lillia, it isn’t clear if that ice broke that she’d come to life. Eboncandle was far more hurt though, so who knows? What is clear though is that Chtholly’s time is almost up. Elq has almost fully taken over and the dream is ending. 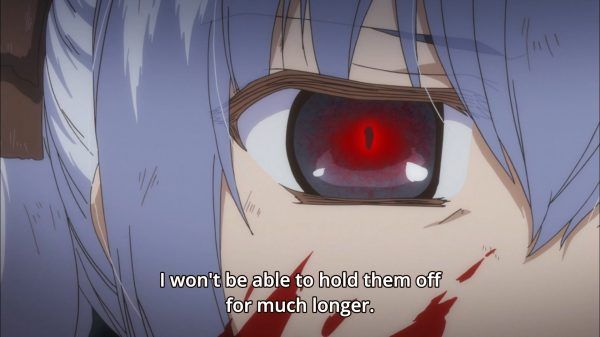 Ren who is being overworked trying to protect Willem and Chtholly as they have a moment together.

On top of that, the Treme beasts have risen up from that giant pit that was being excavated. Which, of course, has led to Rhan, Ren, and Nopht fighting them off. However, with there being hundreds, and each sliced off limb producing another, they are on the fence. So, depending on how this show wants to end, this may not just be the end of Chtholly but a few other characters as well. [note]Let’s be real, this show doesn’t have the guts to kill everyone off.[/note]

I’m still trying to understand the dynamic here. Elq was the master of the Poteaus, but she was young enough to be considered a child? One who was of age to become a spirit to be put into a fairy? Okay.

Then, on top of that, despite being the spirit of, assumingly, a god, Souwong, possibly with Eboncandle’s help, put her into a fairy body? How, and why, would you do that to your master? I mean, while this episode answers a lot of questions about people’s backgrounds, the answers seem off. Not weird, or rushed, but something that works barely enough to accept. Leading to the need to question the creation of the beasts. If they are human, or at least their origins are human, could that mean Lillia is the original? Could it be when the Seniorious’ Hex was used on Elq, by Lillia, the consequence was the creation of the beasts? Also, what are the chances Willem seeing his… whatever again[note]I’m making a lot of assumptions here. Though with Willem, it is hard to say if Almaria was a biological daughter or adopted. Much less if Lillia was their mother or not. For one thing not fully answered is Willem’s relationship with them. Were they close like family or legit family?[/note]? Much less, having to be willing to kill her, or let Chtholly likely kill her, so that the beasts can be put to an end? This is assuming the Chtholly we see in the next episode isn’t Elq whose soul simply takes over Chtholly’s body.

All of this leaves me frustrated and excited. Something I haven’t felt with this show in a long time. Now, as for whether the finale will lead to a big payoff? Honestly, I doubt it. For while it seems Elq may take control of Chtholly and everyone may die, this show doesn’t have an unhappy ending planned. If that was the case, after one of the battles in the past, someone would have died. If not at least have been maimed.

So with the tone of this show being too optimistic, too focused on love conquering all, I’m not expecting much. Will there be blood? Yup. Possibly an epic battle scene? You gotcha! However, I bet you it is going to be ruined with the show forcing a touching moment. One which likely will lead to Chtholly coming back with Blue hair and her dreams coming true.

He proposed and that makes you ‘practically a couple’. Chtholly is kind of mixing up the order of events here.

I know she is a sheltered teen but… Come on now.