What could have been the final battle and end of Sagawa segues into talking about his childhood… yeah.

You Are So Full of It: Makoto, Juri, Takafumi, Sako, Majima, Grandpa

Takafumi plans to milk this misconception he too has powers as much as he possibly can. After all, his father has powers, daughter, and grandson but what about him? He is the head of the family! But, thankfully, Makoto is at that perfect age to manipulate and seems fine going along with Takafumi’s plan.

However, Makoto is also barely beyond being a toddler so, of course, everyone is talking about taking him to a safe place. Which would ruin Takafumi’s plan, so, somehow, he convinces everyone to let him come for his grandpa will protect him. I can’t recall the last time I genuinely hated a character but didn’t hate the show. But I would be so fine with Takafumi dying right now. If not, to be nice, accidentally being expelled from stasis. Because, while I get he wants to regain his position in the family, after being a NEET for so long, with how pathetic he is, you can understand why he doesn’t have a job. Would you want to hire someone like Takafumi? He seems like the type who takes people’s food from the refrigerator to save money. Takafumi seems like the type who, when someone new is hired, he trains them just so that he can pretend he was doing two people’s work and offload some of his work on them. This man, in my mind, I can’t even imagine being with his kids’ mom without begging, pleading, and making her regret giving him a chance for the rest of her life.

But I digress since that was a bit mean.

Tell me how Sagawa, within possibly minutes, notices Makoto is the one controlling the Herald but all the adults really believed it was Takafumi? Really? But, with that said, we see the mental state Sagawa is in since, with the herald giving him a serious challenge, he was ready to take care of Makoto to regain his advantage. However, with Majima getting involved, as well as Juri and Grandpa, the numbers game really made things difficult. 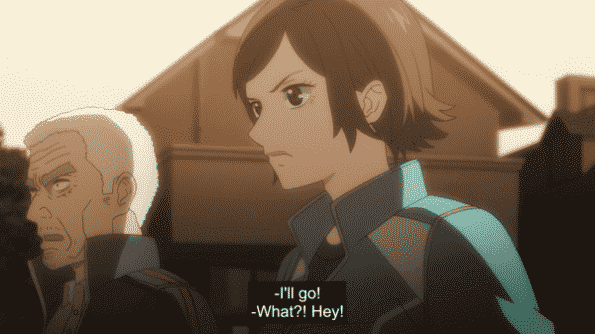 Even to the point that, if Juri didn’t talk so much, she could have expelled Sagawa. Yet, that wouldn’t have allowed for what happened next.

I think Takafumi was written to get your riled up so that when the fight against Sagawa happened, you are ready to yell at your monitor. For considering how gung-ho Juri usually is, and even sometimes acts in the battle, the fact she stands there, watches, even says now would be good, but continues to stand there, is so infuriating. Yet, it’s episode 10. What show is really going to have the kind of ending where one of its heroes saves everyone else and they are stuck in isolation forever? That would have been way too bold, original, and probably fearful to execute.

Don’t Expel Me, Instead Let’s Talk About My Childhood: Sagawa, Grandpa, Juri

As Sagawa seems like he is about to be defeated, he straight up decides to blow himself up until he looks like a mummified corpse. Following that, he begins eating Makoto’s Herald’s intestines in order to regain enough strength to retreat. Leading to Grandpa and Juri chasing him and the only thing stopping Juri from expelling him is this possibility he can help her leave stasis. 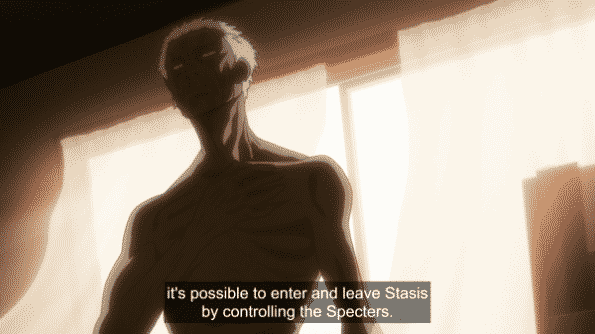 Something which, at first, just seems like stalling so he can jump out of a window, but then he sits down, gets preachy, and talks about his childhood. How his dad was a priest, he was very religious, but that was until he saw his dad and best friend’s mom having sex. Which tarnished everything for him.

Consistently I usually wonder where is so-and-so’s backstory so that we can understand them more, but I’ve come to realize that if the present and future of the character is good enough, that isn’t necessary. Though now, with us diving into Sagawa’s past, I almost wonder if that is detrimental. Do we really need Sagawa humanized? Does that do anything besides maybe take up an episode? What made it seem he wasn’t a religious man who went awry or was someone who took advantage of some cult members to reach his goals? They aren’t the same but pretty much it seems like the show did its job already of why Sagawa is doing what he is doing and who he is.

But, who knows, while this whole, “seeing my daddy cheat turned me into a bad person” is eye-roll inducing, they could turn it around, right? I mean, if we want Juri to get out of stasis, someone has to suffer right? It’s just, I thought it would be the characters.

With that said, considering the strength Sagawa still has, what is to stop him from eating Juri or Grandpa like he did the Herald?

Faith is something that exists in a different dimension from causality and theory. Sometimes, faith is what’s needed to make things turn out well. “Faith” is what makes it possible to even sever yourself from your emotions and attachments.