Even in the dark of night, all alone, the first episode of Junji Ito Collection doesn’t sell you that this is the horror series to watch. Much less that this is adapted from the work of a famous Japanese horror manga artist. 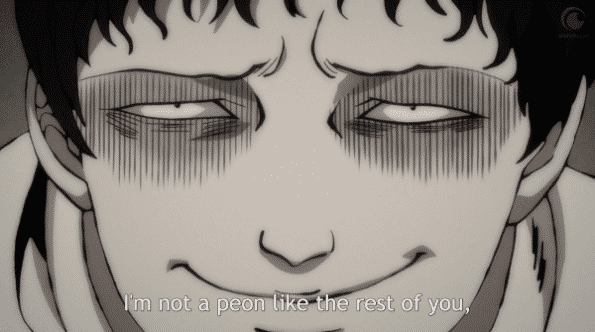 The first episode gives us two stories. One which is so short you wonder if it maybe a preview, dealing with a child who turns into a doll then monstrosity, and the other featuring this creepy kid Souichi. He’s the one which dominates the episode and there isn’t really much of a horror vibe with him besides the fact he is creepy. Yet, with him being an ace with curses but an idiot in social situations, it balances out to the point that any fear factor can mentally be dismissed with ease.

Point blank, assuming this is going to be handled as an episodic anthology, Souichi made for a terrible taste of what was to come. I was expecting, with the hype of “[…] one of the most famous Japanese horror manga artists, Junji Ito, finally gets animated!” from Crunchyroll, watching this at night, alone, in the dark, would mean me needing a psychiatrist or psychologist, whichever gives you drugs, in order to recover from the things I witnessed. Now all I want is to cleanse my mind with a show that is actually entertaining.

But, as also noted in the “About the Show” section, Souichi is seemingly but the star of one single episode. So who is to say the others won’t be more interesting right? Well, I’ll tell you one thing, Souichi and that abdominally short “Hellish Doll Funeral” hasn’t really inspired me to see if this gets better.

Though, I will say one thing, and this is the reason this is being labeled as mixed instead of negative: The looks of everything sets a good and creepy tone. However, once people start talking and the story gets rolling, that is when the show dives off a cliff.