How Not To Summon a Demon Lord: Season 1/ Episode 12 “Battle For Legitimacy” [Series Finale] – Recap/ Review (with Spoilers)

How Not To Summon A Demon Lord sort of ends in a bleh way, but with one last heartfelt moment – before the ladies remind you this is a harem.

What Should Have Been The End of The World: Klem, Diablo, Alicia, Edelgard, Eulerex, Shera, Rem

Despite Eulerex, Edelgard, and Alicia standing before hundreds of Fallen soldiers, nothing happens. Why? Well, with the potions Diablo gave Shera, Rem is alive and after Diablo uses a spell called “Apocalypse Abyss” it wears out Klem enough to see Shera and Rem and make her less angry. Leading to, surprisingly, despite their numbers, the fallen not attacking. Edelgard wipes out as many as possible, as Alicia flees, and that’s it. 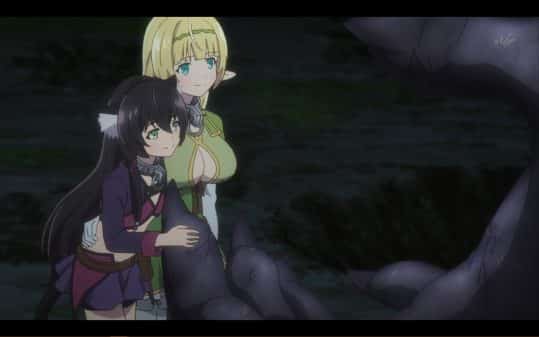 I feel like expecting this huge and wonderful battle would have been a bit much. Yet, I figured Diablo and Klem would kill each other and thus reset everything. For the way it seemed, if this is a video game world, Klem’s death would be endgame – the restart. Yet, instead, at only level 150, Diablo nearly takes down a true demon lord. One who, upon seeing Rem alive, goes back to her true self.

I Don’t Want To Be In This World Anymore: Alicia, Edelgard, Klem, Diablo, Shera, Sylvie, Galford

After the battle, surprisingly Sylvie learns about Klem being the demon lord and is cool with stepping away once Diablo puts a slave collar on her. It seems even Galford kind of hunches it off despite the beef he had with Diablo and his lust for battle. However, one person who doesn’t leave things alone is Alicia. Not because she wants to trigger Klem again, though she could have, but because Edelgard, to protect Alicia, got messed up bad.

So, she takes Shera hostage to coerce Klem to heal Edelgard which, upon Diablo giving the OK, she does within seconds. Leaving Alicia ready to commit suicide until Diablo stops her. For as much as she feels alone and can barely deal with the trauma she has experienced, he relates to her in a way which makes her feel less alone. Mind you, he doesn’t say he can join his harem, but does give her encouragement.

Are you seriously telling me that Galford just let go the opportunity to fight a bunch of Fallen? Granted, Edelgard seemingly swooped her lance and took out a lot, but this seemed like a prime opportunity to let them fight amongst themselves and then kill whoever remained. But, can we also add in, considering the way Sylvie talks about Galford’s network, him letting Klem walkabout, just because she is enslaved to Diablo, makes no sense either? The one who is to bring an end to mortals you are going to let be a follower to some guy you despise? Often fights on the same side but isn’t under the king’s direction? There is so much which doesn’t make sense.

And, let’s be honest, the Alicia thing completely fell flat. Even with linking to how Diablo has felt similar, and reiterate what she went through, there isn’t a “Who cares?” vibe but more so feeling this was rushed. For while I get there is a chance she didn’t meet one nice mortal in her whole life, going for the destruction of them all felt a bit much. Was there nothing in her mind about being a better person, exposing these people, or just leaving that life behind? Venturing out and maybe changing the world for the better? It’s a bit ridiculous and way too lazy in writing for my taste.

Also, taking note Klem has the mind of a child, to a point, why would she let herself become someone’s slave? I get it was for the biscuits and to stick around, but they could have just left the city for somewhere else. Taking note they are broke, this would have made the wonderful opportunity to take on an assignment and venture out into the world.

Which is what they seemingly do, but Klem is nowhere to be seen. All we see is Alicia helping a kid who scrapped their knee and Rem and Shera expressing their jealousy that Klem got a kiss before them. That’s how this show ends.

I would be upset if I had expectations. However, How Not To Summon A Demon Lord is like the kid who lets you know they have potential but are too lazy to put their all into things consistently. For just the fact Diablo never really tried to find a way back to reality bugged me throughout this whole ordeal. But hey, we got ecchi moments right?