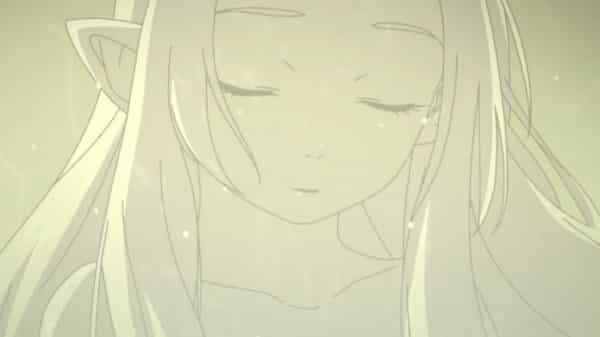 In what could be considered a world-building episode, Kei experiences a betrayal, and once more names are dropped left and right to be fleshed out later.

Why did Tilarna leave her sword behind and bolt? That isn’t answered. Instead, we’re left with the assumption she trusted Kei to take care of her sword but not enough to tell him her plan of going undercover. You see, so we’re told in the episode, despite Tilarna’s airs and graces, she is inexperienced. Hence all her questions about the human, or doreany, world. Also, it explains why she turns to Father O’Neil, despite her misgivings, to help her blend in. After all, who else does Kei seem to trust enough, who is part of the underworld, to get her the ID and look needed?

Once in, it takes little to no time for Tilarna and Elbaji, Dennis, to meet and him try to woo her. Something which he fails to do, but it does lead them to talk and him to reveal why he exploits fairies. Simply put: Money. Going deeper: Social Mobility.

You see, while Dennis and Tilarna come from a similar area, his family is of a warrior class. They have long been subjects to the nobles, dying for them, to which all people in his family ever got was a sense of honor. For Dennis, that isn’t enough. So he moved to the human world and found their love of money agreeable to his sensibilities. Add in how easy they are to use and manipulate, and he built himself a nice empire. One that Zelada latched onto for it fits his goals and even Chief Roth got involved in.

Now, why did Chief Roth decide to get involved with someone like Dennis, though more so Zelada? Nationalism. Yup, the show deals with supremacy and Kei tracks down Tilarna, and gives her sword over so she can defeat Dennis, we learn Chief Roth is a traitor. One who just wants there to be a separation between elves, fairies, and wizards, from humans. Particularly due to how quickly both sides are adapting and yet the otherworldly beings are more likely to benefit from the adaptation. So, with that in mind, he wants Zelada’s bomb to go off. That way, people are instilled with fear, but no infrastructure is destroyed.

Well, at least until that anger turns to war anyway. But with Kei hearing all this, and Chief Roth attempting to kill Tilarna, of course, Kei can’t just let the Chief live. Not that the Chief left the idea they both could walk away on the table, but someone had to die.

To further complicate things, we learn Zelada and Kei have met before. Lest we forget, Kei is a veteran of that war between the likes of Zelada and Tilarna and humanity. Making Zelada, someone who reveals he killed most of Kei’s unit persona non grata. After all, he is who killed his unit, killed his partner as a cop, led to his father figure, Chief Roth, trying to kill him, and is now trying to start a, for lack of a better term, race war.

So, alongside Tilarna, they chase after him, post-Chief Roth giving Zelada a head start, to try to stop the bomb from going off. But whether they are too late will only be revealed in the next episode.

The way I’m seeing things, one episode is based on world-building and a lot of action, then the show doubles back to explain what went on, and do some character building. All the while placing cliffhangers in so that you feel compelled to watch more. Now, if this is the pattern, I can dig it. It will make every other episode a bit much, in terms of terminology, but as long as they provide enough information in the follow-up, I think we can all be on the same page.

It hasn’t been made clear how peace was obtained after the war Kei fought in and whether it was due to one side losing or things coming to a standstill. Either way, one could imagine that many aren’t happy with the peace, and between separation or desiring dominance, both could be on the mind of both sides. Much less, as we learn of the various beings who operate on the other side of the portal, so comes the possibility of conflict of how each sect want to deal with the humans and trying to force the others hand. Leading to this whole Zelada x Chief Roth thing opening a bigger, and honestly more interesting, storyline than a stolen fairy named Leahyah.

This Pushes You To Watch Twice

While I love when shows build up their world and don’t allow it to just be a lifeless backdrop, I must admit Cop Craft continues to be a bit bewildering. Making it where, even if there is a possible pattern emerging, I fear it may not be enough. For who can remember a bunch of Cop Craft specific terms if you are watching a multitude of shows, movies and, most importantly, have a life? And while there is nothing stopping me, or anyone else, from watching this twice, who has the time and does anyone think this show is that good to view it twice?

Not to subtly say this isn’t, but I think what Cop Craft pushes is a sense of urgency not a lot of shows have. Making it where you are forced to keep up, keep in tune, or possibly get left behind. Which, considering we can’t know what terms, titles, and more are necessary to know or good to know, so comes the question of whether Cop Craft acknowledges many likely haven’t read the source material and may feel they need to be eased into things. Rather than, as noted in a past review, being forced to hit the ground running and catching up when and if you can.