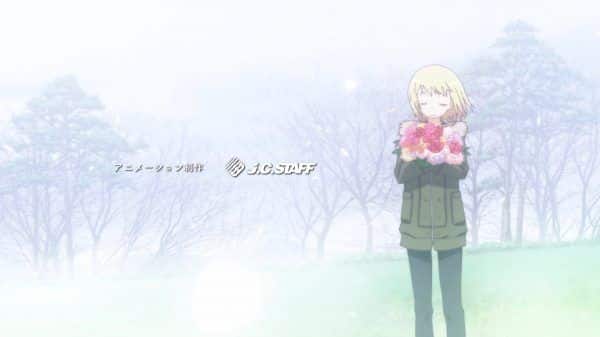 Alice to Zouroku starts off strong, but then it becomes a slice of life kind of show. One which just so happens to feature some low-key sci-fi elements.

In Wonderland, Sana was born and was given a body to roam the world in. But that wasn’t all she was given. She was also given the power to create things based off her imagination. A power which eventually didn’t remain hers alone but spread. Naturally, as government and agencies invested in combat caught wind, they began to snap up these beings. Even try to make some of their own.

Which is what the first 5 episodes are about. The battle over controlling what are known as “Dreams of Alice” users. However, starting episode 6, it is about Sana’s life with her foster family. Her, what I guess can be called foster dad, Zoroku is a florist. His granddaughter, who watches Sana often, and has a hand in raising her, is Sanae. Together, they provide Sana’s first taste of normalcy and what it is like to be in a family. Chores and all.

I’m a bit of a softee. So to have us meet this young child, probably around 10, walking around in a raggedy looking hospital gown got to me. Especially when this old man nurtures her and takes care of her like she is his own. Then, on top of that, you got Sanae which treats her like her cute and naïve little sister. Someone she wants to share everything she has learned partly to see her reaction. To perhaps relive her own reaction to things.

And while it isn’t a huge focus, in the grand scheme of things, her relationship with Yonaga and Asashi was beautiful too. They gave her the platform of what it means to be human, to have friends, and you can tell the separation from them, as Sana often says, “Frazzled” her.

As noted in the summary, the show in the first 5 episodes is a completely different program from the 7 which follow. In the first 5, there is this place called “The Facility,” there are battles, villains, and one noteworthy woman known as Minnie C. She, to maintain control and retrieve Sana for the facility, shot her. A grown ass woman shot what essentially is a child in order to keep her dream of maybe being in her husband’s arms again.

But that isn’t the only thing Minnie C brought. She also had epic battles with Ichijo, who works for a special program within the Japanese government. The kind where, if Ichijo was a bad guy and not someone who supported the rights of Dreams of Alice users, Sana wouldn’t have a chance.

It Drops The Ball After Episode 5

Starting episode 6, things become very slice of life. Sana gets into a routine Zoroku requires of her which means getting the paper, watering plants, and things of that nature. Which is fine at first. You consider if the calm before the storm. However, when the would be storm happens, it is some new Dreams of Alice user freezing people and this making Sana frazzled.

It isn’t the members of the facility having a resurgence, or their sponsors which include foreign governments. Nope, it is a child barely older than Sana becoming some watered down villain. One in which, following Minnie C, was such a disappointment. Not just because she isn’t evil, but she also felt unnecessary.

I mean, to me, if they were going to present peace and no new villain, why not focus on all the Dreams of Alice users we met? Why not dive deeper into the dark past of the twins Yonaga and Asashi, who apparently killed their father? Why not tell us what the hell happened to the grey haired boy? Why instead introduce two new characters when there were a few who we barely, truly, got to know?

As noted, establishing normalcy on this show became a double-edged sword. On one hand, it showed what Ichijo was fighting for on behalf of Sana and the twins. However, on the other hand, after episode 5, normalcy became the bain of this show. It was like getting to eat the meat, have your dessert, and then be forced to eat the vegetables. Of which you take your time, move them around the gravy or meat juices to make them edible, then force yourself to swallow.

I’d recommend watching just the first 5 episodes. The way this series is made, you can end episode 5 and it’ll feel like a natural season finale. Going past that is like watching 7 OVAs which are completely unnecessary. Well, outside of maybe episodes 6 & 7 in which Sana and the twins reunite and Sana becomes a member of Zoroku’s family, officially. As for the rest? They really destroy that positive feeling the first 5 episodes may give you.

Hence the Mixed label for this is one of the rare shows, for me anyway, which starts off strong and consistent, but then completely falls off. Which, if you read each episode’s review, I try to be optimistic about, but once Hatori and her friend come in, reality hits. Goodbye rose colored glasses. Someone just tell me how many more episodes I have to go.