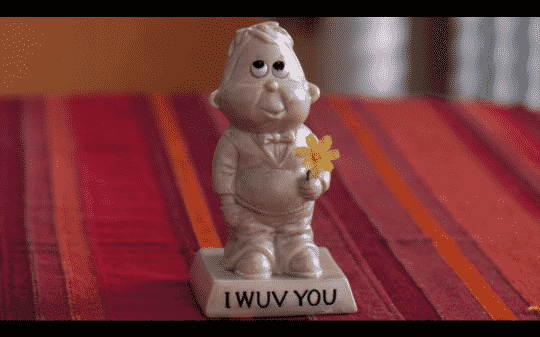 So, it isn't going to be addressed how Jonah is essentially saying he loves Andi? I'm going to be the one to overthink that?

As Andi mulls over whether or not she wants to date Jonah again, Buffy has a decision to make which could change everything.

Despite all those people we saw Amber associate with, back when she was dating Jonah, on top of the boy she was hanging out with while dating Jonah, it seems she has no friends. Something which somehow becomes Bex’s problem since Amber decides to go to her shop and just try on makeup. Not buy anything – just try different stuff.

Which of course irks Bex but with Amber’s sob story she feels bad and thinks maybe a make-under will help. However, all that comes of that is Amber losing an eyebrow and Bex getting a bad review online. 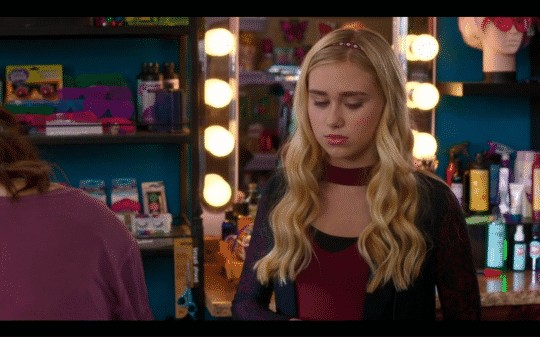 Here is my thing – do I feel bad for Amber? Yeah. However, with her being a high school girl, it just seems so weird to me there isn’t a push for her to hang out with people in her own grade. If not, after Jonah and she were through, the character being written off because she is kind of just around now.

Yes, she has a storyline with her family drama and her now feeling like she has to work in order to help out. I get that and it’s cool that Disney has a storyline like that. But, where can they really take this character and keep her part of the central focus which is Andi, her friends, and family?

With Jonah asking Andi out and her reply being “Um,” it seems Jonah thought that was a yes. So, with that in mind, he has been given her presents, holding her hand again, and with him learning Buffy is leaving, he asks Andi if she wants him to join the good hair crew. And considering how crazy Jonah has made Andi over the last 6 months, honestly, she isn’t sure what to do with Jonah. I mean, lest we forget, her whole relationship with Jonah, as a friend, crush, and boyfriend, has pretty much been trial and error since the beginning. Leading to her, multiple times, realizing this boy drives her crazy – and not in a good way.

But then there is Walker who, with just a name and picture may have just been a reprieve from what Andi is used to. Either way, Andi can’t deal with Jonah’s feelings as he wants them acknowledged right now. Buffy is her priority.

There are times you really need to take two steps back and recognize, Jonah is a kid. Much less, he is a kid who got out of a relationship with Amber. Someone who had serious insecurities and was kind of petty. So to go from someone like that to Andi led to two things. One, an unfamiliar feeling of dealing with someone more secure and who he didn’t necessarily have to be everything to. However, there was also the fact that he took her not being clingy as Amber as a sign he had more freedom.

And with them being tweens/young teens, of course communication is difficult. No one wants to hurt another person’s feelings and are willing to make their own person feel uncomfortable for the benefit of another. Yet, as Andi gets older, we’ve seen her more and more capable of putting her foot down and putting herself first. To the point, it really seems that she might just be too mature for Jonah and is tired of trying to be patient with him.

Hence why she perhaps asks for patience because she knows being with Jonah means she has to be mentally and emotionally prepared. Especially since her feelings still can put her on a roller coaster and a pattern is forming. One in which Jonah is all sweet and like the ideal boyfriend and then he gets comfortable, non-communicative, and arguably even takes advantage of Andi to a point. Not money wise or what we are used to seeing in adults, but definitely takes advantage of her desire to be with her, I guess you can say, first love and make things work out.

Maybe as a response to her parents not being able to work things out.

So Buffy is due to move to Phoenix in two weeks and in case you were wondering how in the world that could happen so fast? Well, it is a combination of Pat’s job and Buffy’s dad being from Phoenix. However, Andi pushes the idea that Buffy, at least until the end of the school year, could stay in her old room at Cece’s! Something Buffy approaches her mom about before Andi gets approval from Cece. Thus leading to Pat confronting Cece about trying to break up her family.

Something which may seem a tad dramatic, but let’s not forget Pat has missed so much of Buffy’s childhood because of her job and that has affected Buffy deeply. Hence why she is so competitive and tries to be the best. She doesn’t want to make her mom worry and also wants to give her reasons to come back and be proud of her.

And taking note of how little time they have spent together, that is why it is decided between Pat and Buffy that Buffy will just go to Phoenix. Which of course is devastating but Andi and Cyrus get it. Aren’t over the moon but they get it.

All I know is, they better not write out Buffy and promote Amber in her place. Heck, or promote Walker to take her place. Like, this is one of the few times, in recent memory, I would be perfectly fine for something to happen that is ever so convenient. Like Pat getting a position in Colorado or her finding a civilian job. Whatever it would take.

Which I mostly say because Marty and Buffy still have not become an official thing and it was left in a very weird place. So if she must leave, be it the show or temporarily, that better be wrapped up with a bow on top.