Ali Wong proves that comediennes can be vulgar and funny, while not being self-deprecating in the process.

Baby number 2, C-section scar ready to be reopened and a 62-year-old nanny waiting for another mouth to give Wong’s free and organic breast milk. Everyone knows their place and with that, Wong has returned to stand-up and is ready to vent about all the things she and her friends didn’t know about childbirth and how her life and marriage have changed since the last special. Providing what should be considered Edu-tainment.

Such as, did you know your breast milk ducts could clog? How epic your queefs can become post birth? What about how the relationship changes and double standards? Sex means so much more when you realize the consequence is 9 months of pregnancy and 18 years of you hoping for the best. Thats on top of being in a country which doesn’t allow you to recuperate. Like, per Wong, the bonding is nice and all, but your body is a wreck and it can make you go from this dainty sweet girl to pulling down your pants so people can see what that man and child did to you.

And it is stuff like that Wong goes into. How being a mom, and now the breadwinner, is stressful and sometimes lonely. Also, that fame sucks because it makes it hard to be cheap. Yet, at the very least, she has a secure relationship with her husband, who is also her best friend, and now she doesn’t have to suck d*** no more.

“Here’s the thing, just because you became a parent, doesn’t mean you grew up.”

It May Not Be Laugh Out Loud Funny, But It Is Comical and Informational

Let’s preface this whole thing by noting comedy is subjective and having an actual hear sound laugh is dependent on your life and what you have gone through. So don’t take this all as a underhanded compliment. For truly, whether talking about wanting to be a trophy wife but being more so a commemorative plate, her sex life before or during her marriage or commenting on the double standards women go through, Wong is hilarious. On top of that, she brings a perspective we don’t hear a lot of female comedians bring since a lot of them either don’t have kids, don’t want them, much less aren’t really trying to talk about what it is like to be pregnant or the early years.

Making it so, in many ways, Wong not only has that market cornered but presented a real version of it. Hence the edu-tainment comment since you don’t learn all that much in health class about birth and thereafter. Labor sounds like the worse kind of punishment there is, probably worse than most death penalties, but as for the placenta thereafter, babies having difficulty latching and stuff like that? Until you know, you kind of don’t.

And it is in interlacing what Wong didn’t know, but learned the hard way, with her style of comedy that makes you really appreciate motherhood. Especially if you are a man who won’t go through 1/16th of the issues. 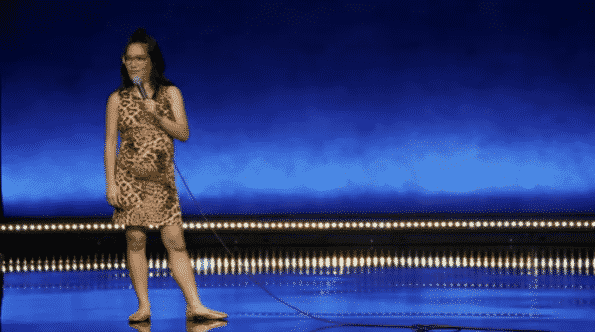 Being that comedians don’t take huge gaps between specials anymore, it is like each special isn’t a book as much as it is a chapter. One which doesn’t so much make each special seem like an exclamation point as it is a continuation. Such could be said for Wong since, as she notes, she is coming to a point where talking about her vagina and talking about sucking off dudes isn’t as strong in her repertoire anymore. It still is very much part of her story, but she is coming to a point where she wants to talk about other things.

And with that, maybe that’s why I wasn’t laughing my head off. Similar to a musician, comedians evolve and you have to adapt to where they are in life and how that changes their output. So while she is still funny, undeniably, and this special isn’t necessarily a huge leap from her last one, there are still certain changes that you have to adjust to. Which, being that I know Wong just for her specials, and admittedly haven’t checked out her other work yet, it means I’m not fully acclimated.

So, as much as I can enjoy her, being that I see her as someone on a level a lot of similar comediennes aren’t at, and does material many of them can’t do, there are a lot of comparisons. Even though there aren’t many who can directly, side by side, be correlated.

Being that I just can’t bring myself to watch American Housewife, I await with great excitement Wong’s Netflix production with Tiffany Haddish, Tuca & Bertie, even if it is animated. For between this and Baby Cobra, it is clear that Wong has more to bring to the stage and entertainment than being an Asian woman. She is past inclusion for the sake of diversity. Her insight and jokes are all her own and while you can see bits and pieces from other comedians, there is no one like Ali Wong.

Hence the positive label. This is the type of special which strangely feels like it is part of a series. That Baby Cobra was part one, this part two, and you can see how Wong has evolved in between without it being a huge step. There is enough to require some adjustments and fine tuning to expectations, but she makes it where, even if you may not get it at first, there is replay value so that, be it the same day or later in life, you’ll learn to appreciate the snapshot of life she is providing more.

Check Out Other TV Special Reviews