The Story of 90 Coins – Summary/ Review (with Spoilers) The Story of 90 Coins is the type of short you want to see become a full-length feature. For just the way it makes your heart beat quicken and brings tears to your eyes in just 9 minutes, it is like you are the one experiencing the whirlwind that is falling in love.

What we are presented with is a love story. One which is supposed to feature a 90-day commitment to convince a young woman, Chen Wen (Zhuang Zhiqi), an aspiring fashion designer, to marry Wang YuYang (Han Dongjun). Over this period of time, he tries to woo her, show her that he is dependable and can be consistent. Yet, they are both young. Both with dreams of how to have autonomy and yet also be with one another. Two things which clash and leave you to wonder, how strong is their love?

It’s So Simple Yet so Beautiful

It is with a heavy heart and tears welling in my eyes that I write this. For I’ve been put on a bit of an emotional ride. One in which I’ve seen the beauty and cuteness of new love mixed with the fears of seeing it threatened by outside forces. I even found myself re-watching this, due to the short runtime, and what were once tears just circling my eyes dropped off my eyelashes and went down my cheeks.

Which I know sounds a bit over dramatic, but Zhuang Zhiqi does something different than most protagonist. There isn’t this grab you by the heart and then she squeezes so you can understand her pain type of performance. Instead, we are presented with this rather this weird sensation. 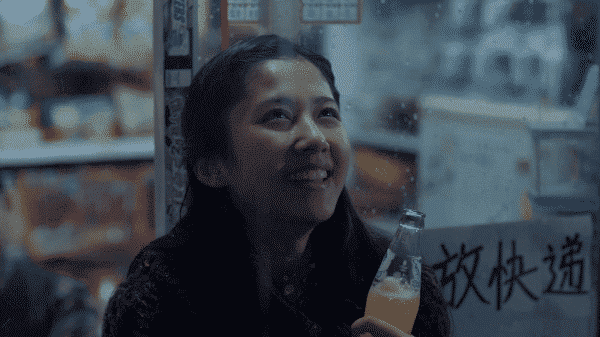 I think the best way I can put it is that Chen Wen’s emotions melt into you. Her joy becomes your joy and you find yourself with a dopey smile and a quickened heartbeat. Then, no sooner than those feelings have become one with you, the worry and fear of separation comes in. Tears begin to stream down your face and you find yourself questioning this: Are these emotions a reaction to what is happening to Chen Wen or has Zhuang Zhiqi connected with you on such a level that she has made Chen Wen’s emotions your own?

Something which, I can’t say another actress or script, has led me to feel in quite a long time.

I want a full-length film. This, for me, seemed almost like a super cut. Something to pique your palate for more and to entice investors. Thus forcing you to watch this over and over again because there is this hope you missed something. That maybe you accidentally pressed a button and fast forwarded through the film. Because when it is over, it leaves you with this insatiable crave for more.

To the point you’ll likely, as I did, go through Director Michael Wong’s Vimeo page hoping there is something else like The Story of 90 Coins on there. Hence the Positive label followed by the recommendation.

Watch The Story of 90 Coins below.