Wherever I Look
Recaps, Reviews, and So Much More
Home Movies Love and Mercy – Overview/ Review (with Spoilers)
MoviesPositive (Worth Seeing) 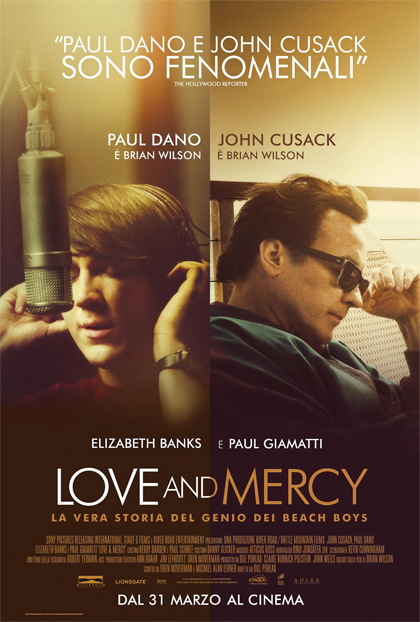 What can I say, the foreign posters were better than the english ones.

I won’t claim to be a huge Beach Boys fan, but I do love what would be considered their greatest hits like “God Only Knows,” “Kokomo,” and a handful of others. So, naturally, with there being a Brian Wilson biopic, in a sense, featuring their music, his genius, as well as his madness, it was hard to not be interested. Through in Elizabeth Banks, John Cusack, and Paul Dano and increasingly I found very little reason to miss this. Now, to see if I was mistaken in assuming this would be good, look below.

It is often said that to be a genius is a burden on the mind and will often drive the person mad, such could definitely be said about Brian Wilson (Paul Dano/ John Cusack). For with us seeing his madness drive his genius during the Beach Boys years, and then seeing the damage it cause, when paired with drugs and years of abuse, it really helps you understand why music is perhaps one of the greatest creative outlets there can be.

Focusing on the story, we deal with two stages of Wilson’s life. The first stage, or rather half, features Dano as Wilson from when Surfer Girl, through the Pet Sounds album, to Good Vibrations. The other half of the film deals with an older, more fragile, Wilson, played by Cusack, who is estranged from his family, dealing with grief and addiction recovery, and is under the thumb of Dr. Eugene Landy (Paul Giamatti). Thankfully, though, a woman named Melinda (Elizabeth Banks) comes into Brian’s life and seems poised to free him of Dr. Landy. However, considering the medication Brian is under, and the legal issues involved, whether or not the situation ends in tragedy only those who see the movie, and fans, will know.

While I didn’t find myself shedding any tears from the production, I must admit it was hard to see Cusack as Brian suffer and not feel something for him. Also, I must note, the combination of Cusack and Dano’s take on Wilson help bring a fully realized person. For with Dano handling the younger years, showing how Brian’s life slowly, but surely, got to where Cusack took over allowed them both to shine. Which was a surprise to me since with Dano hosting Wilson during the time where we get to see his genius as he creates many of the songs people know and love, I was honestly thinking Cusack would be at a disadvantage. However, while Cusack’s portion may lack music, it has a compelling story which deals with seeing Brian estranged from his family, dealing with his mental illness, and dealing with the trauma Dr. Landy imposes on him which, based off what we see and are told about Brian’s father, you know must have been crippling.

Which brings me to praise Dano and Cusack’s co-stars Paul Giamatti and Elizabeth Banks. For, in my opinion, Dano pretty much is on his own when it comes to the younger years, outside of battling it out with Brian’s father Murry Wilson (Bill Camp). So, thankfully, Giamatti presents such a compelling villain that it is hard to believe he is real. After all, considering all that Wilson has done, seeing him monitored and trapped like a child on a leash seemed unreal to the point I was left wondering was Cusack’s part fabricated. Low and behold, though, upon doing a google search, all of it seems to be real.

Thus leaving Ms. Banks. Now, the reason her part in this is worth praise is because my knowledge of her is from The Hunger Games and Pitch Perfect, and while she doesn’t have a Charlize Theron or Mo’Nique 180 degree turn in the film, she does show that she can do more than wear silly costumes and make you laugh. Making it so that while it may be sad she is perhaps the only strong female character in the film, at least writers Oren Moverman and Michael A. Lerner made her impactful enough to not be quickly forgotten like Brian’s first wife.

Naturally, a film like this cannot cover everything so many things have to just be touched on, like Murry’s part in the Beach Boy’s success. However, I must admit I was disappointed that the gap between the end of the production on Smile and Wilson coming under Dr. Landy’s care wasn’t included. For while, in the long run, I recognize it might not have added much to the production, at the same time I do wish some of the erratic moments were documented and shown.

Also, in terms of the ending, while I enjoyed seeing Wilson and hearing him sing, leading to perhaps one of the rare times I sat through credits in a non-Marvel movie, I do wish it would have shown him reuniting with the Beach Boys and his daughters, alongside his solo work. If only because most of the film deals with building Brian’s importance through the Beach Boys, so between pictures, video, or even something with the actors, I just wished there was more closure than us being told he married Melinda, released a Grammy-winning album, and got rid of Landy.

As you can see, to find something negative about this film is difficult unless you have in your head a specific way you think biopics should be. But with Love & Mercy using two actors to portray two different periods, there is what makes it stand out. For rather than start from the beginning and then travel to the present, it presents the two major parts worth noting: the high and the cliff before the decline, and the time period before Wilson is back on his feet. Thus allowing Dano and Cusack to present Wilson at his best and worse, while presenting his mental illness as something which is far from comical; showing the damage Murry Wilson did, both by showing him, and presenting Dr. Landy as someone like him; and finishing things off with the icing which is Mr. Wilson himself performing. Thus letting you know, while he may have drowned in his genius for a while, and had someone controlling his oxygen supply, he still eventually found a way. Albeit not on his own, but thanks to Melinda who continues to prove that perhaps the only thing which has kept many a rock star alive is the one woman who gave a damn about the person, and not the name and perks which came from being with them.