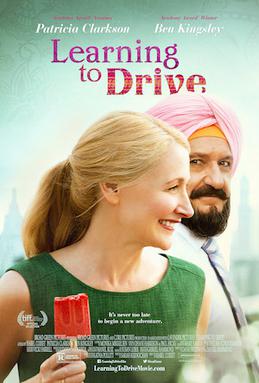 Learning to Drive is the type of melodrama which doesn’t demand your attention, and almost in a shallow manner asks for your sympathy but, there are still aspects of it that likely will keep you watching until the end.

According to Wendy (Patricia Clarkson), every 7 years her husband Ted (Jake Weber) has done something which rocked the marriage. Before we are introduced to them, though, it seemed the biggest issue, for her, was him buying a motorcycle. However, now it is another woman being involved. Something Wendy is willing to overlook, but it seems Ted is trying to move on. So, to try to move on herself, Wendy plans on trying to learn how to drive. Something Darwan (Ben Kingsley) plans to help her with.

But, as Wendy deals with a potentially nasty divorce, Darwan has his own troubles. From immigration harassing him, his attempts to help other people from India get acclimated to America, and then having a married arranged, he has a lot on his plate outside of his time with Wendy. Heck, racism due to living in New York in a post-9/11 world is also something he deals with on a daily basis.

Making for a movie which sort of presents the idea: Some People Have Real Problems.

Arguably, the storyline of Darwan deserves its own movie. He is a political refugee who just made it to America before the 9/11 attacks; he houses immigrants and tries to help them get acclimated to America; and he, after so many years, has gotten married. Add in his now wife, Jasleen (Sarita Choudhury) is a fish out of water, who meets this woman who basically drags her out of shyness, and you get a movie vastly more interesting than what is presented.

Wendy is such a hard character to get into. Be it because we never see the good times of her relationship with Ted, because her breakdown over the divorce seems more because she doesn’t want to be alone than lose him, or just because, in comparison to Darwan, her problems just seem so small. I mean, add in the issues her daughter Tasha (Grace Gummer) has, and you still don’t have much reason to connect with Wendy.

There is a moment toward the end when I honestly think Wendy thought maybe Darwan had feelings for her and tries to curve him. Not perhaps understanding the main reason, after she gets her license, he wants to be friends with her is because she could help him understand his wife and they have become cool.

As said many times before, after a certain point a person builds up a tolerance and it makes it so you demand something stronger. Now, in most cases that would mean stronger alcohol, drugs, or what have you. For me, what I need often times are stronger stories. Ones which seem to at least attempt to challenge the actors, instead of seeming like just another paycheck to get them by. Which, for the most part, is what this movie is. For I’ve seen other movies featuring both Clarkson and Kingsley, so I know the blame doesn’t belong on them. So I can only assume between the writer’s vision, to what the studio wanted, something perhaps went awry.

I mean, not to reiterate anything, but Ted is barely in the movie to make us hate him, feel for Wendy, and Tasha seems just thrown in there to prove they once had sex. Then, even with Wendy and Ted reminiscing a bit over Tasha’s photos, again it seems that more could have been done with this relationship. To the point, it makes Darwan’s place in this movie, and then us getting to know him, almost seem like anything between a distraction to something which, ultimately, eclipses whatever Wendy has on. Almost to the point, it seems like Wendy is a Trojan Horse for Darwan’s story.

Hence the TV Viewing label for the movie isn’t bad, but it is one of those types of movies which leave you thinking: it has so much potential unrealized.