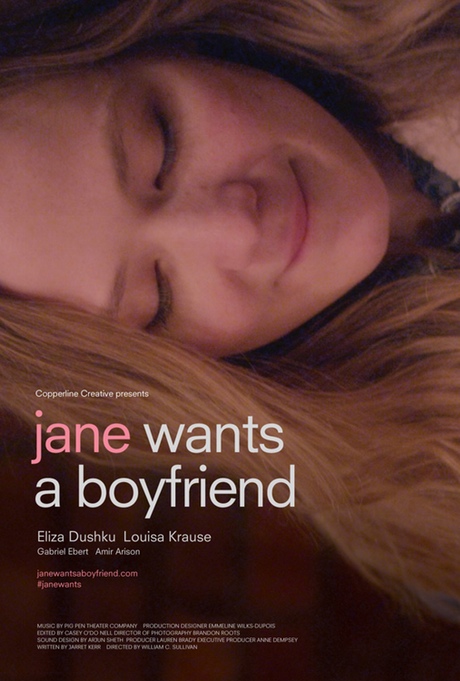 Witness the sometimes trying life of Jane as she pursues not only getting out from under her parent’s roof but her first real taste of romance. All the while dealing with Asperger’s syndrome and the expectations from those around her who seemingly have long underestimated her capabilities.

To say this movie was better than expected is an understatement. For while Eliza Dushku is a familiar face, outside of Dollhouse, I can’t recall too many things she has been attached to which have been worth any time or effort to see. However, I was pleasantly surprised, more so by Louisa Krause than Dushku, for we are presented a very interesting romance film. One which I wouldn’t say is touching, for that word is a bit overused, but I would definitely say that as there are many continuing to push for diversity in film, showing someone with Asperger’s pursue love is definitely a rare and welcome sight. Even if the person playing the woman with Asperger’s seemingly is just acting.

The main focus of the movie is Jane (Louisa Krause) and how people react to her. You have her parents who are well adjusted to her having Asperger’s, and yet with them moving to New Jersey there is this idea of perhaps Jane’s sister Bianca (Eliza Dushku) taking over. An idea which pretty much doesn’t sit well with either Bianca nor her boyfriend. After all, she makes it clear to us, the viewer, that interacting with Jane and having to monitor and take care of her are two drastically different things. Of which, with Bianca just moving in with her boyfriend, is too much.

Something which bothers Jane for her parents are moving, thus breaking her routine, and then with Bianca trying to save face, but the stink of her BS breaking through, it is frustrating. On top of that, being that Jane is what I guess could be considered high functioning, she wants to be treated as an adult. She wants to make her own costumes for the theater she and Bianca work at, she wants people to stop monitoring her and let her just be and, most of all, she wants to experience the type of love she sees in old time black and white movies.

Which is the heart of the movie. For, in a way, Jane’s evolution, socially, is almost like a coming of age tale. She goes from slightly coddled, with dreams and wishes that some thought her incapable of, and she proves them wrong. Granted, she stumbles, has her moments, and the people closest to her disappoint her on more than one occasion but in the end, we see a growth in her which, as with most coming of age or romance films, is partly due to her love interest. The man’s name is Jack (Gabriel Ebert) and with his past comes raised eyebrows and suspicion. Yet, unlike everyone else, he sees something in Jane which lets her be herself without apprehension and in that you find the petals which have resulted from her growth.

Jane Wants a Boyfriend certainly presents a rarely seen thing in media. I mean, outside of The Secret Life of the American Teenager, I can’t recall many on the autism spectrum not only being featured in something but having full lives. Jane, while she does live with her parents, has her own job and is shown that she has aspirations. She wants to make costumes for the theater productions and wants to fall in love.

A topic which exposes quite a few interesting things. The first being that just because two people are autistic, it doesn’t mean they are meant for one another. The boy who they try to hook Jane up with, Steve (Jon Bass), is a self-absorbed ass. Yet because their families think they are lonely, they figure they will just accept the other. No. Thankfully the film doesn’t have Jane accept this as her fate and as if Steve maybe the best she can get. She seems more willing to be alone with her fantasies than with someone like him.

On top of that, I quite loved that the film showed the complex people have with someone having a romantic interest in someone with Asperger’s. For Jack, between his past and the idea of someone liking a person with Asperger’s, I feel like we got a taste of all the discrimination people with Asperger’s face before someone even really has a chance to get to know them. Then, on top of that, we are given a taste of how awkward it can be to date someone who you have to be wary of certain things, such as just taking their hand, as well as worrying that one freak out, or awkward moment, could scare someone away.

For while I would never say the film is overly comedic or dramatic, it can bring a tear to your eye for Jane is trying. She knows she is socially awkward to the point Bianca is embarrassed by her and doesn’t trust her to be alone. Yet she is a grown woman. One which wants privacy, wants to be wanted, and yet isn’t trusted to do so. Then, you have to consider her emulating people around her like a kid. Something which, at first, can come off funny, but once you realize part of the reason she is mimicking people is because she likely hasn’t been exposed to the situations she is in, it becomes a little heartbreaking. For, essentially, she is like a little kid at first trying to learn what is and isn’t appropriate but is often coddled too much to honestly learn anything and the more you think about how between her Asperger’s and her family that is why she is kind of stunted, it is hard to not get a little teary eyed.

To be honest, pretty much anything not dealing directly with Jane’s character just wasn’t worth noting. Bianca is having issues with trying to focus and hone her craft as an actress, but being that Dushku isn’t the best actress out there, much less there isn’t a lot of depth to Bianca, she is easily forgettable. In fact, while I want to appreciate they did give Bianca a life and some background, I often felt her life was just as a counterpoint to Jane’s. Which was the only way I could get over how tiresome Bianca focused scenes were.