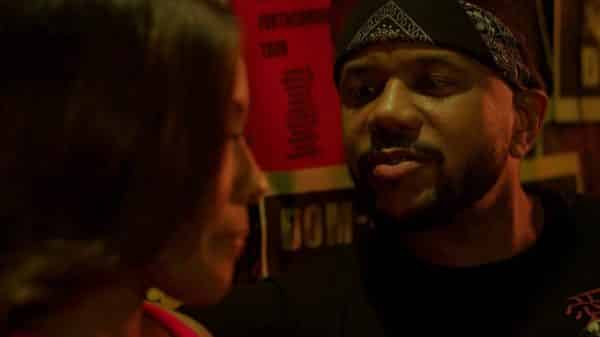 A woman who, after a one night stand, is obsessed with the guy who has moved on from her and she feels slighted. Sound familiar?

With a handful of hits under his belt, Dominic aka Dom D, was on top of the world. He was making hit after hit, invited to the Grammys, and could have any woman he wanted. One of which include Lexi. A nice girl, by appearances, from Clarksville, Maryland who was studying to become a nurse. They spent one night together and then he ghosted her.

Five years later, Dom returns to the area, not as big as he was before, and Lexi catches wind that he is around. So, she goes to the club he is at and is surprised to learn he doesn’t remember her. So, what it a woman to do, with a history like Lexi, which includes your usual runs with mental institutions, when slighted by a man? I bet you can guess.

Dom is the lead character of Fanatic and is a popular rapper. At least in the beginning. After a 5-year time jump, he seemingly is big enough to make $20K on club appearances but seemingly in trying to make a comeback. One which likely will be derailed a bit by Lexi.

A nurse, who has had a traumatic past, who falls for Dom after a one night stand they have. However, with him ghosting her for 5 years, and getting married, she is hurt but willing to reconcile. Even if Dom barely remembers her enough to know why she’d be after him.

A cop who is responsible for the case associated with the night things go wrong, in so many ways, for Dom.

A reporter who profiled Dom, who later becomes his wife, who seems to be the main person willing to not believe surface-level information after something happens to Dom.

One of Dom’s closest friends, who also might be his bodyguard, that brought Lexi to Dom and is with him through multiple rough patches in his career.

More Of The Same

Honestly, while the performances aren’t bad, it’s hard not to feel this movie isn’t following a checklist. Be it a woman who seems charming, warning she is fragile and yet the guy still pursues her, us learning the woman got serious issues, or things ending in a major battle. We’ve seen this done a million and one times and while I will give Fanatic props for having a slight Misery vibe at first, then it goes the generic route.

Making it so Lexi is someone with a bad childhood, which includes being gang-raped, miscarriages, and being put in an institution. The kind of things which are supposed to make you think she is seriously crazy rather than look at Dom as the ass he is for doing her dirty like he did. Maybe even seeing what he goes through as karma.

But, I guess it’s easier just to make Lexi be this woman who is off her rocker and having the usual endgame fight scene we’re used to.

While there aren’t necessarily bad performances, and the dialog isn’t terrible, the backgrounds and story is uninspired. The characters seems interchangeable with any film you think of similar to this, and it leads you to wonder how long will Jordan Peele seem like the only person who will have a Black majority cast in a thriller which isn’t recycling what was seen many times before? Hence the mixed label. Despite Fanatic being something you’ll be able to sit through, I wouldn’t even say if you had a friend who usually talks during movies they’ll be able to liven this up. It’s a one and done good for a lazy Sunday, and that’s about it.

We learn in the end Sheriff Hardaway was one of at least three who raped Lexi and his restitution towards her was helping with kidnapping Dom D. Someone who is saved thanks to his wife Zoe never being put off despite the Sheriff or even Dom’s friend Quan believing Lexi’s little tricks to throw off the public.

But, despite seemingly killing not only the Sheriff but Lexi, months after their fight, it seems Lexi is still alive. How do we know? Well, Lexi calls, sounding as alarming as usual while a very pregnant Zoe is talking to her. Then, from behind, we see a door open up and just before it is clear who is popping out – the film ends. Meaning, there could be a sequel, but I don’t see how they could make another hour and a half film focusing on Lexi’s revenge.