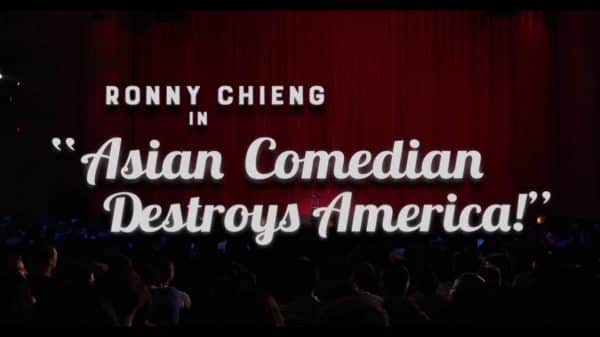 While it takes Chieng to warm up a little longer than it should, once he sets up the jokes for the latter half, it is all smooth sailing.

Being someone who grew up in multiple countries, Chieng has a unique take on America and how things are here. Be it the wastefulness, the desire for immediacy, or how different America would be with more Asian people. But, all of this, and his love for Black people, that is just to set up the summit which is the story of what preceded his wedding. That is when the special finally gets rolling and when it ends.

The Build To The Grand Story

As a whole, you come to appreciate Chieng’s build, for it warms you up and lays down the foundation so he can hit you with one joke after another that will likely make you laugh. And on the journey to the height of his taping, he hits you with small moments to make you laugh and get used to his style of comedy. Be it jokes about the state mottos, what it would be like if the US had an Asian president, as well as touching upon Asian stereotypes and some Chinese history.

All of this allows you to get Chieng’s style and makes it so when he talks about marrying his wife, the need for three weddings, and so much more, it feels like you went on a journey with him. One that may feel a bit long, but the payoff is sweet.

For Most Of The Taping, Chieng is D R Y

I’m not going to lie, up until he starting talking about the trials of getting married, and getting to Australia for one of the first ceremonies, this was a bit boring. Chieng, don’t get me wrong, is funny, but he isn’t rolling on the floor, makes you feel like you got bronchitis funny. He’ll get a few chuckles out of you. Making it so, by the time you reach to the peak of the taping, you might be ready to write him off and throw him in with the many others who lead you to question, “Were they chosen for the sake of content or because they really had something special?”

But then he recovers with his marriage story. Which, despite talking about it so much thus far, I will say is good, but doesn’t necessarily compensate for the long road to get to it. Even if the jokes preceding the story help build up the final jokes.

I think I sometimes forget that just because someone is getting the spotlight on Netflix, Hulu, Amazon Prime, or HBO, it doesn’t mean they are up and coming or one of the top comedians right now. Often times, it just means they were affordable and the content seemed good enough. So that was what I was expecting, and while Chieng did bore me a bit, by the time it was over, I wasn’t left thinking he was terrible.

No. Like so many other stand up tapings, while you have to respect the time it took for the comedian to get to this point, to be on stage and tell jokes, never mind make a career out of this, you can’t associate the word “special” with this. It may please their fans, but it isn’t that earth-shattering taping that could lead to Chieng becoming an It boy.

While Ronny Chieng: Asian Comedian Destroys America has its moments, largely Chieng doesn’t push the idea he is anywhere near the apex of comedy. Most of his set is about building to one good joke with a litany of lukewarm ones. Making it so, ultimately, you may feel the word “special” continues to get watered down and lower expectations for future comics who have their sets released on any platform.